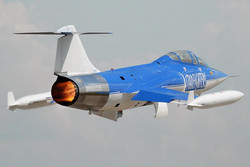 Adventurers train for space in the Lockheed F-104 Starfighter.

Participants will train for space in the Lockheed F-104 Starfighter, the same jet used to prepare Mercury, Gemini and Apollo Astronauts for space travel.

You no longer have to be an astronaut to train for space at one of NASA’s premier space facilities. Incredible Adventures is teaming up with Starfighters Aerospace to offer a four day commercial space flight training program at NASA’s John F Kennedy Space Center, near Orlando, Florida. Flight Training is open to anyone who meets basic age, health and security clearance requirements.

Participants will train for space in the Lockheed F-104 Starfighter, the same jet used to prepare Mercury, Gemini and Apollo Astronauts for space travel. The four-day program offered by Incredible Adventures and Starfighters Aerospace is designed to prepare participants for the physical and emotional demands of a suborbital flight.

Two days of intense academic instruction and safety briefings prepare and qualify participants for a high-speed training flight in the Starfighter on day three. The flight profile simulates a journey to astronaut altitude and includes a vertical climb and maneuvers replicating the g-forces and weightlessness of space travel. The program concludes with a VIP tour of NASA’s Kennedy Space Center.

In October, Starfighters, Inc. signed a historic Space Act Agreement with NASA, granting the Florida-based company permission to use NASA's Shuttle Landing Facility for commercial flight operations. The agreement gives Starfighters Aerospace access to one of the largest runways in the world and the right to use special, restricted airspace for its flight training operations.

The basic cost of the four-day training program at Kennedy Space Center is $30,500 and includes security clearance, academic instruction, use of training equipment and one training flight in the F-104 Starfighter captured on high-definition video. More advanced space flight training, including an additional F-104 training flight, is $48,750.

For more information, contact Incredible Adventures at 941-346-2603 or visit http://www.incredible-adventures.com.