Brain monitoring of Jackson's propofol could have saved his life despite the other drugs in his body. For the second consecutive year, propofol expert, Dr. Barry Friedberg will address the annual Congress of Mexican Anesthesiologists, this year in Veracruz, Mexico. Also, an expert on brain monitoring of propofol, Friedberg will lecture on how to increase its usefulness with his internationally acclaimed PK (or propofol ketamine) anesthesia. Unlike general anesthesia, PK anesthesia has had no deaths since its inception in 1992. 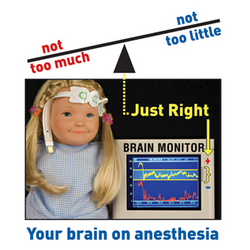 Demanding a brain monitor when 'going under' in surgery is a no-brainer.

Prominent anesthesiologist, Dr. Barry Friedberg, has been quoted as a propofol expert in articles about Michael Jackson's death in both People and Globe magazines this year.

For the second consecutive year, Friedberg is an invited speaker to the annual Congress of Mexican Anesthesiologists being held this year in Veracruz.

"Michael Jackson appears to have died from propofol over-medication that caused his breathing to stop," says Friedberg.

He continued saying that three essential items appeared to have been critically absent from the situation at Jackson's home.

First, according to his own public statements, Dr. Murray was not directly observing Jackson when he stopped breathing.

Second, no evidence of a pulse oximeter (a blood oxygen meter) was apparent in publicly published pictures of Jackson's bedroom.

Third, a brain monitor could have measured the effects of propofol independently of the benzodiazepines also in his body, sparing him from the unintentional over-medication with propofol that appeared to have caused his breathing to stop.

To the delight of last year's doctors at the live anesthesia demonstrations, both patients slept peacefully through their respective surgeries.

Upon the completion of their surgery, both patients awakened, moved themselves over to their gurney (to go to recovery room), sat up and enthusiastically thanked Dr. Friedberg for the nice anesthesia experience.

"Since 1992, my patients kept telling me how much they enjoyed 'going under' with PK anesthesia. So it came as no surprise to me that Michael Jackson enjoyed the experience as well," Friedberg said.

When the ground breaking textbook, 'Anesthesia in Cosmetic Surgery,' was commissioned in 2004, Cambridge University Press editor Marc Strauss chose Friedberg first among 40,000 American anesthesiologists to author the book, primarily because of his novel, safer PK anesthesia.

Unlike the recent high profile deaths of Donde West or Stephanie Kuleba involving general anesthesia, PK anesthesia has had no deaths (or near-death experience like Tameka Foster's) since it's 1992 inception.

"When the patient's brain is giving direct information about how the propofol is affecting it to the anesthesiologist, the patient cannot get too much or too little propofol but only just the right amount it needs not to hear, feel or remember the surgery," says Friedberg. "That's why PK is like general anesthesia without the risks."

Friedberg's 'Anesthesia in Cosmetic Surgery' went on sale in June this year translated into Portuguese for Brazil, the world's number one country for cosmetic surgery.