Acclaimed designer Cosimo Pizzulli prepares to release initial bottling from Pizzulli Family Winery. 2007 Sangiovese will be followed by 2007 Nebbiolo and 2007 Barbera, all grown in Los Alamos, on California's Central Coast. 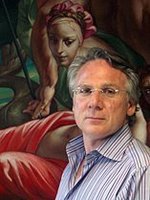 Wine is first and foremost a beverage to be served with food.  It’s important to me that my wines are food friendly

Pizzulli is not new to winemaking. In 2003, he planted Sangiovese vines in a half-acre hillside vineyard located on the grounds of his Pacific Palisades home.  A few years later, Pizzulli produced his first wine from those vines in a wooden shed across the driveway from his house.  Inspired by fond memories of making wine with his grandfather in Brooklyn, Pizzulli is continuing the tradition of crafting small lots of Italian varietals handed down through the generations of Pizzulli family winemakers, from Puglia, Italy to the Central Coast of California.  A photo of Pizzulli’s grandfather graces the wines' labels.

Pizzulli izzulli Family Winery’s artisanal Cal-Italia wines are well-crafted with modern state-of-the-art techniques and a certain Old World style, a contemporary wine influenced by what Pizzulli’s ancestors most likely produced in Italy in the 1700s.  “Wine is first and foremost a beverage to be served with food.  It’s important to me that my wines are food friendly,” says Pizzulli.

Despite his demanding schedule as head of a full-service design firm with worldwide projects spanning retail, entertainment, hospitality and residential fields, Pizzulli could not resist developing his “garagista” wine hobby into a commercial venture.   “It’s all part of the art form that I live by,” says Pizzulli.  “I had to bring my wines to market so that I could share them with as many people as I could reach.  I once designed a furniture collection for a luxury resort on the island of Sardinia.  The furniture received such a positive response that we mass produced the concept with a manufacturer in Norway.  Going commercial with my wines is the same thing. While I’m only producing 100 cases of each of my three wines right now, the idea of attracting an audience that goes beyond my family and friends is very exciting.”

Pizzulli considers his wine another work of art, given the same passion and attention that goes into literally everything he designs.  When asked what most motivates him, Pizzulli says, “I really pay attention to all of the sensual arts, including painting, sculpture, music…even food presentation can be inspiring and, of course, wine, the way it looks, smells, and tastes.”  Pizzulli’s lifestyle revolves around hospitality, whether he’s creating an inviting seating arrangement or gathering friends to his home for an evening of wining and dining.

Considering the very limited production of Pizzulli Family Winery’s initial releases, the primary target for sales is Los Angeles-based restaurants and wine shops.  In fact, the 2007 Sangiovese was immediately embraced by some of the restaurants that Pizzulli designed, including Enoteca Drago in Beverly Hills and Il Ristorante di Giorgio Baldi in Santa Monica.  “It’s a perfect fit.  My wines poured in restaurants that I designed,” says Pizzulli.

The marketing strategy for Pizzulli Family Winery is primarily viral. “I’ve never mounted a conscious campaign of any sort,” says Pizzulli.  “In the world of design, the Pizzulli name gets passed around a wider scope of clients with each project we complete.  My vision is that Pizzulli Family Winery’s reputation as a producer of great wines will grow with each person who tastes the wine.”

Pizzulli’s goal is to continue producing small lots of the wines that he most likes to drink, increasing production slightly as the wines gain a following.  The focus will remain on Italian varietal wines, Sangiovese, Barbera and Nebbiolo with the introduction of an unique Piedmonte-inspired Rosé in 2010.

ABOUT COSIMO PIZZULLI
Cosimo Pizzulli is the founder and president of Pizzulli Associates Inc, a full-service interior architecture firm with worldwide projects totaling more than $500 million to date.  Founded in 1986 with offices now in Santa Monica and Las Vegas, Pizzulli’s practice encompasses retail, entertainment, hospitality and residential fields.  International credits include projects for BMG Entertainment, Brazilian American Trade Center, Bill Gates’ Corbis Company,  Hearst Magazines, Pacific Capital Group, Sony Music Entertainment, Universal Music Group, William Morris Agency, and Yamaha Motors International USA, among others, as well as high-end restaurants, hotels, retail and residential properties in the U.S. and Europe, including homes for Larry King and Paul Anka.  Pizzulli’s furniture designs are manufactured commercially in Italy, Norway and the U.S. His work has been featured in international publications in Italy, the Netherlands, England, and the U.S.  As a fine artist associated with the New Mannerists, his paintings have been exhibited in museums and galleries in Italy and the U.S.  Pizzulli’s extensive background in architecture, industrial, product and fashion design, as well as the fine arts, includes his position as Art Director with designer Gianni Versace in the early 1980s in which Pizzulli worked closely with both Versace and famed photographer Richard Avedon.