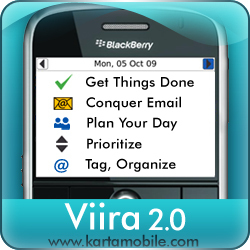 Viira 2.0: Get Things Done with Your BlackBerry

Now with seamless BlackBerry Email and Calendar integration, Viira makes it even easier to capture 100 percent of your commitments and to keep track of all the different levels of focus in your life.

Karta Mobile Inc. today announced the public availability of Viira 2.0, the updated and enhanced version of its popular BlackBerry® application that brings the principles of David Allen's Getting Things Done® (GTD®) productivity system into the hands of busy professionals, executives and entrepreneurs worldwide.

The new version of the already full-featured Viira adds several industry firsts, including the ability to create tasks based on incoming email messages, effortlessly prioritize tasks, and designate next actions. Viira is also the only BlackBerry GTD app to fully incorporate appointments and events in its underlying organizational system.

“Getting Things Done: The Art of Stress-Free Productivity” is a popular work-life productivity book by David Allen that shows readers how to effectively organize tasks, information and communications in an intuitive way. Since its debut in 2001, the GTD methodology has been enthusiastically embraced by millions of knowledge workers around the world.

While a multitude of web-based tools for implementing GTD have been made available over the last years, the engineering challenge of building effective and intuitive BlackBerry applications has left the principles of Getting Things Done under-represented on BlackBerry smartphones.

Viira has stepped in to fill the void. With Viira 2.0, BlackBerry owners can now conquer their inboxes by creating to-dos from the incoming email messages and immediately filing them in their appropriate place. Handling large volumes of incoming email has been a known pain point for people implementing Getting Things Done with BlackBerry devices – until now.

“Now with seamless BlackBerry email and calendar integration, Viira makes it even easier to capture 100 percent of your commitments and to keep track of all the different levels of focus in your life: from next actions to life goals. Everything is in one place…at your fingertips and off your mind,” said Chris Balavessov, CEO of Karta Mobile and chief Viira architect.

Viira remains completely BlackBerry based. It does not require an active Internet connection to work properly and can continue to function just as well in areas with limited or no wireless coverage, such as tall buildings, basements, airports and metro areas with overly-congested wireless networks such as San Francisco.

BlackBerry is a line of smartphone devices developed by Research in Motion that provide mobile access to email, phone, IM, music, games, applications, the Internet and more. BlackBerry devices are used by millions of people worldwide, particularly by business professionals who appreciate the BlackBerry platform's capability to easily access corporate data in a secure way, along with the full QWERTY keyboard featured on most models.

Karta Mobile Inc. is a privately held company based out of Vancouver, BC that specializes in BlackBerry software development.

*NOTE TO EDITORS: High-resolution art assets for Viira 2.0 are available upon request.

Your Day at a Glance with ViiraDay View is a feature unique to Viira that allows people to manage all of their commitments for a given day from one convenient place.

Email IntegrationViira integrates with the BlackBerry Email application. Creating a task from an email and immediately classifying it is a snap.

Projects in Viira 2.0Grouping all related appointments, emails, tasks and reminders has never been easier with a BlackBerry.

Getting Things Done With Viira 2.0