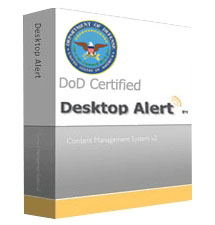 Whether responding to emergencies within their home states or when federalized in support of total force objectives, Desktop Alert capabilities will enhance the Guard's effectiveness and responses.

"The readiness of our citizen soldiers and airmen of the National Guard depends on timely alerting and mass notification. The Desktop Alert team is honored to play a key, real-time role for the National Guard as the 'first line of defense' for the United States,” said General (retired) Lance W. Lord, Desktop Alert advisor. “Whether responding to emergencies within their home states or when federalized in support of total force objectives, Desktop Alert capabilities will enhance the Guard’s effectiveness and responses.”

The 9th annual National Guard Bureau Joint Information Technology Conference is supported by the Air National Guard and the Army National Guard. The program includes both information technology and communications management representatives from all 54 states and U.S. territories.

NGB JITC brings together ARNG and ANG Information Technology professions to review the various IT structures within, and related to, the National Guard’s dual role (State and Federal), and discuss opportunities for integrated solutions. The expected outcome is to recognize the continued and ever expanding role of the Guard at all levels, focusing on the Domestic Response role, as well as share information and gain a better understanding of each other’s issues, allowing collaboration on potential combined solutions for the future.

Worldwide U.S. Military organizations such as The United States National Guard, The United States Air Force Academy, The United States Military Academy at West Point, Multi-National Forces in IRAQ, The U.S. Air Force, and The U.S. Army now utilize the DTA mass notification platform daily for their organizations emergency communication requirements. Desktop Alert can contact thousands of computer users at their desktop and require them to click to confirm receipt of the message flashed on their screen. Those not verified can then be listed on a report and/or sent as a "Target Package" to be automatically contacted by other means such as email, SMS, phone calls and other devices.