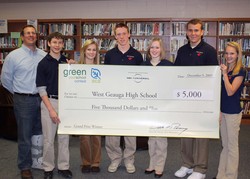 At a time when environmental awareness and understanding is critical, NBC Universal is proud to show our continued commitment to support green initiatives and educate the next generation in meaningful ways

The Student Conservation Association (SCA) and NBC Universal Foundation today announced the winning schools for the national “Green Your School” contest. The initiative, which launched last spring, challenged eco-conscious high schoolers to submit their school’s best green-related projects. Funding for the “Green Your School” contest comes from the NBC Universal Foundation in connection with NBC Universal’s Green Initiative, “Green is Universal.” After reaching out to hundreds of thousands of classrooms nationwide, a panel of distinguished judges, including NBC News’ Anne Thompson and environmentalist Simran Sethi, selected West Geauga High School in Chesterland, Ohio as the grand prize winner of $5,000. Two runner-up prizes of $2,500 were also awarded to Boston Latin School in Boston, Mass. and Amphitheater High School in Tucson, AZ.

“Congratulations to all the winning schools. There were so many remarkable and inspiring projects, that it made going from nearly 100 entries down to 10 finalists and three winners incredibly challenging,” said Dale Penny, President of SCA. “These talented young people demonstrate a willingness to tackle complex environmental issues in an effort to reduce their schools’ carbon footprint. We are pleased to encourage a new generation of conservation-minded green experts.”

The “Green Your School” contest engaged students in conservation projects that improved, restored, or beautified their school’s environment. To be eligible, entries had to be student-led and have been started after August 1, 2008. Projects were judged on their environmental impact on the health of the school, sustainability, and the involvement of other students, teachers, administrators and/or the outside community.

“At a time when environmental awareness and understanding is critical, NBC Universal is proud to show our continued commitment to support green initiatives and educate the next generation in meaningful ways,” said Susan Haspel, Vice President, Corporate Community Affairs, NBC Universal. “Young people want to know where and when they can make the greatest environmental difference and this contest motivates them to take action.”

About the Student Conservation Association
SCA is a nationwide conservation force of college and high school students who protect and restore America's parks, forests, refuges, seashores and communities. For more than 50 years, SCA's active, hands-on practice of conservation service has helped to develop a new generation of conservation leaders, inspire lifelong stewardship, and save the planet. SCA is a non-profit headquartered in Charlestown, New Hampshire with regional offices in Washington D.C., Oakland, Pittsburgh and Seattle. For further information, visit http://www.thesca.org.

About Green is Universal
Launched in May 2007, “Green is Universal” is NBC Universal's ongoing green initiative dedicated to raising Green awareness, effecting positive change to the environment, and substantially greening its own operations. Throughout the year, NBC Universal uses its numerous media and entertainment platforms to educate the public on the environment, with over 250 hours of green-themed content airing across 42 NBCU brands.