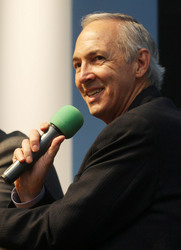 “When we started Greenbuild at the U.S. Green Building Council, green building was in its infancy, and no one could have guessed what it would become in just a few years,” says Yudelson.

“From the first conference in Austin, Texas, in 2002, when we had barely 250 exhibitors and 2,500 attendees, the show has grown in just seven years to more than 1,000 exhibitors and 25,000 attendees at the most recent event in Phoenix last month,” Yudelson remarked. “This year, exhibitor booths increased by 30 percent, at a time when most other expos were shrinking in attendance. This is a remarkable tribute to the strong trend underlying green building in the U.S. and around the world.”

“This year, Greenbuild illustrated that green building has become a worldwide phenomenon and that the conference has become a leading platform for showcasing its global impact. By hosting the meeting of the World Green Building Council and showcasing 11 of the leading world councils from six continents at the opening plenary session,” said Yudelson, “Greenbuild demonstrated not only the expansion of green building worldwide, but also positioned itself as the leading international event in the green building industry.”

Yudelson added, “Greenbuild has also become the greenest trade show in the world, with hundreds of exhibitors committing to a green code of conduct in booth construction and operations. For example, this year all of the carpet used on the trade show floor will be sent back to the factory for recycling, whereas in most shows, the carpet is sent to a landfill after the event. Additionally, we typically set records each year at the local venue for the amount of recycling and use of organic food.”

Yudelson concluded, “What I’ve enjoyed most about my time heading the Greenbuild committee was the chance to work with talented people to create and establish permanently a world-class green building event, one that brings together all of the products and services, along with the leading-edge experts, needed to make the green building industry the success that it is today.”

For more information on Yudelson Associates please visit the company’s website, http://www.greenbuildconsult.com. Jerry Yudelson can also be seen on YouTube at youtube.com/jyudelson and followed on Twitter at twitter.com/jerryyudelson.