The 3D Computer Graphic Adventure Grossed Over One Billion Dollars Worldwide in its First Two Weeks. Concept Overdrive Discusses its Extensive Role in the Creation of Many of the Film's Special Effects. 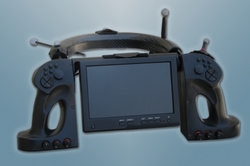 "On-set users had no idea of how much data was flying around the room, they just took for granted that they could get the shot - which is how it should be."

James Cameron's 3D computer graphic adventure Avatar broke box office records in its first two weeks, largely because of the films stunning special effects; Concept Overdrive is proud to announce the technologies which were at the core of many of those effects.

"We were approached by the Avatar production in late 2005 because we had been developing real time motion management systems," said Concept Overdrive President Steve Rosenbluth. "The Avatar workflow was all about integrating streams of motion in the production environment, both real and virtual, so our technology was a perfect match."

Avatar's biomechanical "Amp-suit" was on a hydraulic motion base controlled by an "Overdrive" motion control system. Motion paths from Maya and Motion Builder were imported, accelerations modified on the Overdrive timeline, and ethernet SDK triggers from other systems synchronized the base with camera and CG departments.

Hi-Def camera telemetry was gathered by Concept Overdrive's streaming SDK in microcontrollers on the camera bus. Overdrive read camera focus, iris, zoom, interocular and convergence data, acting as a streaming telemetry server. Datasets were recorded in the Overdrive motion editor by remote computers using the ethernet SDK - thus the real world camera metadata was both distributed live to other departments and stored for post production.

The "Samson" helicopter was filmed on a hydraulic gimbal controlled live by the Overdrive control system. Actors and camera operators alike performed inside the helicopter while outside operators simulated a flight path with joysticks. The helicopter motion was captured so the moves could be matched in the 3D computer graphic environments.

Simulcam was the process of combining real world actors and sets with computer graphics actors and sets, giving the director the experience of shooting the scene live. This new process allowed the shot to be framed accurately and facilitated artistic decision-making "in-camera". The camera motion in Simulcam, both lens data and gross positioning from an optical mocap system, streamed through an Overdrive system. The data was sent live into the 3D CGI world via Concept Overdrive's ethernet SDK, allowing the "compositing of worlds". Automated datasets were generated for post-production, and a video application called "Vcap" was developed by Concept Overdrive for the calibration process. Industry experts are saying that Simulcam was the groundbreaking technological advance of the film.

Concept Overdrive developed the Synthesis system for Avatar, which was the editorial pipeline of the main camera stage. The harvesting of metadata from this mocap stage was largely automated by Synthesis, which assembled assets from multiple departments after each take. The system gathered the data, modified it and rendered it into computer-game resolution video files which were "digital dailies" for the editorial department. A flexible task-sequencing architecture was designed which utilized networked resources to automate the render process. Nearly every CG shot in the film passed through Synthesis; the renders were the final editorial cut of the film before the high-resolution rendering.

The Virtual Camera, which is prominent in Avatar publicity, contains a Concept Overdrive microcontroller which handles analog and digital inputs, sending them through an Overdrive system to be streamed into the 3D computer graphics world. A camera-wheels device was also developed with an internal embedded Overdrive computer; this was fed into the CG world and used for dolly shots with frame-accurate sync. Nearly every CG shot of the film flowed through Overdrive computers and protocols at some point.

"Being a deterministic hard real time system, the Overdrive boxes were the only computers on set that could gen-lock to camera shutter and time code." Rosenbluth says, "On some shots there were four of our systems running in parallel, it was awesome to see it all happening. On-set users had no idea of how much data was flying around the room, they just took for granted that they could get the shot - which is how it should be." Concept Overdrive systems ran unattended for months at a time.

The technologies deployed on Avatar saved man-years of labor and made the virtual production run like a live-action shoot. Industry experts are calling the Avatar technology ensemble one of the greatest technological achievements of recent cinema history.

Concept Overdrive released version 1.0 of Synthesis and version 2.3 of Overdrive in the fourth quarter of 2009.