At their December 26th launch party at Taipei 101 in Taipei, Taiwan, DK City unveiled the db0 3.0 electric folding bike to the attending public, including over 80 press representatives. 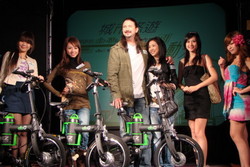 At their December 26th launch party at Taipei 101 in Taipei, Taiwan, DK City unveiled the db0 3.0 electric folding bike to the attending public, including over 80 press representatives. Mr. Matthew "Mashow" Lien and his wife Daisy, spokescouple for the db0 3.0, joined DK City President Mr. Hans Huang to host the party. Mr. Lien is a globally recognized world music singer-songwriter and producer whose music focuses on environmental and cultural themes. The bikes were made available to the attendees, who could take a test drive and assess the bike's performance. The db0 3.0 received unanimous praise from the audience, who were impressed by its sleek designer appearance, eco-friendly message, and "humanized power". The event also highlighted DK City's relationship with ROBRADY by showcasing a video that introduced its studio and team. In early 2009, DK City had sought out ROBRADY design after seeing their award-winning work on the eco-friendly electric Vectrix VX-1 Maxi Scooter and Super Bike, as well as their work with designing many products for Segway. The two companies partnered in August 2009 to design, develop and manufacture the db0 folding bike line. The db0 3.0 has garnered international design recognition with the receipt of the gold Spark award in October of this year. Photos and additional videos of the launch party can be seen on ROBRADY's Facebook page.

DK City Corporation was founded in 1987 and is headquartered in Taichung, Taiwan with an additional facility in Shanghai, China. They employ 1500 people and have an annual sales volume of US $400 million. They are committed to innovating, designing and manufacturing technologically advanced and environmentally friendly products. Known for their sophisticated fitness equipment, massage chairs, and recreational electric scooters and golf carts, DK City has recently expanded into the pollution-free electrical bicycle and motorcycle market. This expansion is driven by their desire to protect and preserve the planet for future generations.