Marriott's Spirit Of Aloha Tour, a month long traveling road show that will bring the vibrant sights and sounds of Hawaii to a dozen U.S. cities, launched today with a traditional Hawaiian blessing at the JW Marriott Desert Ridge Resort & Spa in Phoenix followed by a visit to the Phoenix Children's Hospital. 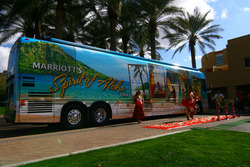 Marriott’s Spirit of Aloha Tour, a month long traveling road show that will bring the vibrant sights and sounds of Hawaii to a dozen U.S. cities, launched yesterday with a traditional Hawaiian blessing at the JW Marriott Desert Ridge Resort & Spa in Phoenix followed by a visit to the Phoenix Children’s Hospital.

The blessing signals the start of a 5,530-mile journey aboard a 45-foot-long tour bus emblazoned with colorful tropical images of Hawaii, that will visit 11 additional cities, traveling across Texas and then to Atlanta, Charlotte, Nashville, St. Louis, Omaha, Denver and Salt Lake City with a final two-day stop in Los Angeles, February 11-12.

“Our aim is to encourage folks to travel to the Hawaiian Islands in the coming year and stay at one of our beautiful Marriott Resorts on Kauai, Oahu, Maui and Hawaii’s Big Island,” said Chris Tatum, vice president of Marriott International – North Asia, Hawaii and South Pacific. “Hawaii is already popular across the U.S. – our goal is simply to raise the level of awareness and give people the extra nudge to come see us.”

Also, in support of Marriott International’s environmental strategy to save the Amazona rainforest, Marriott Resorts Hawaii secured an eco-friendly bus for the Tour. The bus was designed to cut down on carbon emission. Last year, Marriott’s Spirit of Aloha Tour had offset its carbon footprint of 6,775 miles by investing in the Juma Sustainable Development Reserve project. In 2008, Marriott International and the state of Amazonas signed an agreement to support the first project of its kind to help protect 1.4 million acres of endangered rainforest.

After the blessing, the first stop for the road show was Phoenix Children’s Hospital, where Jasmine Trias of American Idol fame and dancers and musicians from the Polynesian Cultural Center entertained young patients, their parents and staff.

“Marriott is a longtime corporate supporter of the Children’s Miracle Network,” said Tatum. “We’re happy to bring our aloha to these kids and plan to do the same at a number of other hospitals during the tour.”

The Hawaii Visitors and Convention Bureau is partnering with Marriott Resorts Hawaii on the promotional tour and its president and CEO John Monahan traveled to Phoenix for the launch.
“The Hawaiian Islands remain one of the most beautiful and enchanting places on earth to have fun, relax, and rejuvenate,” said Monahan. “Now is a particularly good time to visit because there is tremendous value to be found in our accommodations and activities.”
Traveling on the bus will be Marriott Resorts Hawaii leaders, including general managers and directors of sales and marketing from each of its resort hotels, who will visit with travel partners, groups and media. Performers from the Polynesian Cultural Center will be providing Hawaiian entertainment at each stop.

American Idol Season 3 Top 3 Finalist Jasmine Trias of Oahu, will join the tour as the ambassador of aloha for the Phoenix kickoff and the close of the tour in Los Angeles. Jasmine, who will be making public and media appearances, currently appears with the Society of Seven group at the Gold Coast Hotel & Casino in Las Vegas. She is also working on her long-awaited second album, due for release in 2010.

Hawaiian Airlines, which has partnered in all three of Marriott’s road tours, provides daily nonstop flights between Phoenix and Honolulu, as well as Los Angeles and several other West Coast cities, and is the main carrier around the Hawaiian Islands.

“Marriott’s bus tour has been a great way to remind people why a Hawaii vacation is such a special experience, and that Hawaiian Airlines is the best carrier serving Hawaii,” said Glenn Taniguchi, Hawaiian Airlines senior vice president for marketing and sales.

The 12-city, four-week Marriott’s Spirit of Aloha Tour schedule* is as follows:

Editor’s Note: High-resolution images and interviews with Jasmine Trias are available upon request.

Marriott International, Inc. (NYSE:MAR) is a leading lodging company with more than 3,300 lodging properties in 68 countries and territories. Marriott International operates and franchises hotels under the Marriott, JW Marriott, The Ritz-Carlton, Renaissance, Residence Inn, Courtyard, TownePlace Suites, Fairfield Inn, SpringHill Suites and Bulgari brand names; develops and operates vacation ownership resorts under the Marriott Vacation Club, The Ritz-Carlton Destination Club, The Ritz-Carlton Residences and Grand Residences by Marriott brands; operates Marriott Executive Apartments; provides furnished corporate housing through its Marriott ExecuStay division; and operates conference centers. The company is headquartered in Bethesda, Maryland, USA and had approximately 146,000 employees at 2008 year-end. It is recognized by FORTUNE® as one of the best companies to work for, and by the U.S. Environmental Protection Agency (EPA) as Partner of the Year since 2004. In fiscal year 2008, Marriott International reported sales from continuing operations of nearly $13 billion. For more information or reservations, please visit our web site at http://www.marriott.com. For an interactive online version of Marriott's 2008 Annual Report, which includes a short video message from Chairman and CEO J.W. Marriott, Jr., visit http://www.marriott.com/investor.