Fifteen hundred Scientologists and their guests from across Canada and the United States gathered to attend the opening of the Church of Scientology of Quebec/Eglise de Scientologie de Quebec on Saturday. 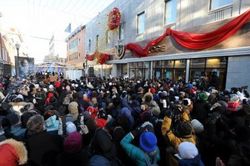 Let this new home for the Church of Scientology in Quebec be a beacon to all men and women of goodwill – a place where they will always be welcome to work together in helping this world...

Fifteen hundred Scientologists and their guests from across Canada and the United States packed the street in front of 665 rue Saint- Joseph in the heart of the Nouvo Saint-Roch district of Lower Quebec City to attend the opening of the Church of Scientology of Quebec/Eglise de Scientologie de Quebec on Saturday. The opening of the 47,000-square-foot Church, which will serve parishioners from throughout the province, represents significant growth for the congregation, which was formed in Quebec 35 years ago.

Mr. David Miscavige, Chairman of the Board of Religious Technology Center and ecclesiastical leader of the Scientology religion, presided at the dedication ceremony, welcoming the assembled Scientologists and guests to the new Church. His introduction was met with prolonged and enthusiastic ovation in appreciation of his presence in Quebec and his instrumental role in making possible the opening of this new Church and all it represents for the future of Scientologists in Canada.

As Mr. Miscavige stated, “This new breed of Church is all in preparation for much more to come in the future. Well, that future is upon us now.”

The Quebec Church marks the beginning of a major Scientology expansion across Canada, with new Churches to be opened in Montreal, Quebec; Kitchener, Ontario; Winnipeg, Manitoba; and a full renovation of the Church of Scientology in Toronto. Also on the horizon, on 190 acres just outside Toronto, is the Scientology Advanced Organization for Canadian parishioners and Canada’s Continental Liaison Office to coordinate Scientology expansion and social betterment programs across the nation.

Dignitaries participating in the dedication of the new Church included the Honorable Alvin Curling, former Speaker of the Legislative Assembly of Ontario and now Senior Fellow at the Center for International Governance for Innovation; the Honorable Pamela Appelt, a judge in the Court of Canadian Citizenship and a patron of the International Centre for Human Rights and Democratic Development; and Mr. Alan Stein, noted religious freedom and human rights attorney and professor of law.

The three-story stone and glass structure spans a city block with distinctive Art Deco façades at the two main entrances. The building has undergone extensive renovation to accommodate all Scientology religious services and also serve as a home for the community services the Church provides through the many activities and humanitarian programs of its members.

An expansive Public Information Center houses a permanent multimedia exhibit describing the Church’s beliefs and practices and the life and legacy of Scientology Founder L. Ron Hubbard. Displays also cover the Church- sponsored humanitarian and social betterment programs that offer practical answers to the societal ills of crime, drug abuse, illiteracy, declining moral values and natural and manmade disasters. These programs represent the work of the Church of Scientology in servicing every community in which they reside as well as other communities around the world.

There is also a Chapel for Sunday services, weddings, naming ceremonies and other congregational gatherings; spiritual counseling rooms; course rooms for religious study; an event hall and seminar rooms; a bookstore containing the written and spoken materials of L. Ron Hubbard; and Public Affairs offices and meeting rooms to coordinate social betterment programs with like-minded organizations in the community. For the convenience of parishioners and visitors, there is also a café.

In opening the dedication ceremony, Mr. Miscavige noted that the day gave new meaning to Quebec’s motto Je me souviens— I remember. In closing, he said, “Let this new Church symbolize the fact that we not only remember
Quebec, we shall also never forget our commitment to her people—and all in the spirit of this from L. Ron Hubbard:

“‘When you leave here today and walk out into the world, remember the tools of life that you have and your role to use them to help your fellows.’”