After 20 rescue attempts, a hard-to-catch entangled California sea lion that was first spotted at San Francisco's famed PIER 39 docks, was successfully rescued, rehabilitated and released back to the ocean by The Marine Mammal Center in Sausalito, CA. Despite rainy skies, a crowd assembled at Rodeo Beach in the Marin Headlands, Sausalito, CA to watch as "Abagnale" made his way back to the ocean on February 5. 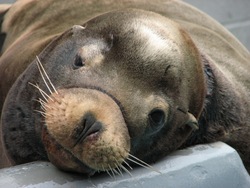 Abagnale rests entangled-free in his pool at The Marine Mammal Center in Sausalito, CA. Photo by: Marie DeStefanis.

“What’s maddening is that you look at the wide array of reasons why marine mammals strand such as illnesses and malnourishment and this one – marine debris – is something we can control if we just change our behaviors about how we discard trash."

After nearly three weeks and 20 rescue attempts, an adult male California sea lion with a tight fishing line entanglement around his neck and mouth was released back to the ocean at Rodeo Beach north of San Francisco today by The Marine Mammal Center. Abagnale, as the sea lion was named after the 1960’s con artist Frank Abagnale Jr. who was always two steps ahead of authorities, was originally spotted at PIER 39 on the evening of January 1, and was rescued in Moss Landing Harbor by The Marine Mammal Center on January 24. With rescue options dwindling, and the animal’s life threatened, the team decided to try something never done before with wild, free-swimming marine mammals. Using darts, veterinarians injected a mild sedative into the animal to calm and slow him down in order to facilitate a successful and safe rescue. The Center’s rescue team, both in the water and on land, were then able to rescue the sea lion and transported him to the Center’s Sausalito hospital headquarters.

At the Center, veterinarians anesthetized the malnourished sea lion and removed the monofilament nylon fishing line that was deeply imbedded into his neck and mouth, performed a physical, and they administered antibiotics and pain killers. During his 13-day-stay at the hospital, Abagnale ate just over 100 pounds of herring. On February 2, veterinarians examined the pinniped again and were pleased to see that the wounds were beginning to heal and that there appeared to be no other complications. Given his regained strength and healthy appetite, veterinarians feel confident that Abagnale will survive quite well in the ocean and that the saltwater will help his wounds continue to heal.

Abagnale’s entanglement story, sadly, is a common one seen at the Center. In 2009, approximately eight-percent of the 1,702 marine mammals that volunteers and staff at The Marine Mammal Center rescued stranded as a result of entanglement in marine debris. The Center responds to seals, sea lions and other marine mammals that are in need of rescue along 600 miles of coast between Mendocino and San Luis Obispo Counties and through 800 volunteers and a small staff, provides medical care to each animal admitted with the goal of getting those patients healthy enough to be released back to the ocean.

“What’s maddening is that you look at the wide array of reasons why marine mammals strand such as illnesses and malnourishment and this one – marine debris – is something we can control if we just change our behaviors and attitudes about how we discard plastics, fishing line and other trash that can become marine debris,” said Jeff Boehm, executive director at The Marine Mammal Center. “We hope people will hear Abagnale’s story and make a pledge to eliminate marine debris, and in turn, help marine mammals and the ocean.”

In December 2005, the Center came to the rescue of a 50-foot-long humpback whale in the Pacific Ocean near the Farallon Islands that was entangled in more than 40 crab-pot lines. In 2008, Dr. Frances Gulland, director of veterinary science at The Marine Mammal Center, along with a team of researchers, examined a 51-foot-long sperm whale that had died and washed up on a California beach – a victim of marine debris. Dr. Gulland and the team discovered nearly 450 pounds of commercial fishing nets, braided rope, and other debris inside the animal’s stomach – a pile the size of three large refrigerators.

About The Marine Mammal Center’s water rescue team:
The Center’s water rescue team is a specialized unit of 14 trained volunteers who perform water and dock or pier-based rescues of marine mammals, the majority of which are entangled in marine debris such as plastics, netting, fishing line and crab-pot lines, among other things. Last year, the team logged in more than 900 rescue hours. With Abagnale’s rescue, they logged in just over 280 hours.

About The Marine Mammal Center’s Save Our Seals – Save Ourselves campaign:
The Save Our Seals – Save Ourselves campaign is The Marine Mammal Center’s first comprehensive outreach campaign produced by the Center that is designed to inspire ocean stewardship and show the connections we have with marine mammals and the ocean environment that we all share. By leveraging its extensive knowledge of marine mammals, its marine science education programs for schoolchildren and the public, and its newly rebuilt hospital headquarters in Sausalito, the Center encourages and inspires people to make a difference simply by changing their behaviors. The public can learn more about this campaign and ways to eliminate marine debris at http://www.marinemammalcenter.org/learning/comm/pubeducation_campaigns/save.asp
and they can take a pledge to end marine debris at http://www.thepetitionsite.com/1/Pledgetocare

About The Marine Mammal Center:
The Marine Mammal Center is a nonprofit veterinary hospital, research and educational center dedicated to the rescue and rehabilitation of ill and injured marine mammals - primarily elephant seals, harbor seals and California sea lions - and to the study of their health. Since 1975, the Center has been headquartered in the Marin Headlands, within the Golden Gate National Parks and has rescued and treated more than 15,000 marine mammals. The Center’s newly rebuilt headquarters in Sausalito gives visitors the unique opportunity to learn about marine mammals through viewing areas and educational exhibits. The hospital is open to the public daily 10 A.M.-5 P.M. except for Thanksgiving, Christmas and New Year’s Day. For more information and to sign up for the Center’s eNewsletter, go to: http://www.MarineMammalCenter.org

Abagnale is fed herring by volunteers at The Marine Mammal Center in Sausalito, CA. Photo by: Marie DeStefanis