Houston-based EnergyPoint Research, an independent market research company specializing in measuring and monitoring customer satisfaction in the oil and gas industry, recently announced results from its comprehensive 2008-09 Oilfield Products & Services Survey, which focused on the industry’s satisfaction with the products and services it purchases and utilizes. First-place rankings go to M-I-SWACO for oilfield services, Derrick Equipment for oilfield products, Helmerich & Payne for land contract drilling and Noble Drilling for offshore contract drilling. 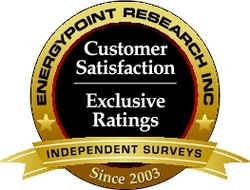 Results from this survey are some of the most interesting we’ve observed since launching our ratings seven years ago. To a large extent, the survey measures suppliers’ abilities to manage on behalf of customers in times of change.

Houston-based EnergyPoint Research, an independent market research company specializing in measuring and monitoring customer satisfaction in the oil and gas industry, recently announced results from its comprehensive 2008-09 Oilfield Products & Services Survey, which focused on the industry’s satisfaction with the products and services it purchases and utilizes. The survey included more than 3,800 evaluations from industry professionals at both global and domestic multinational and independent E&P companies and contract drillers.

“In an industry subject to so much volatility and uncertainly, those oilfield suppliers that are able to consistently perform at high levels, regardless of the circumstances, increasingly stand out from the crowd,” said Doug Sheridan, managing director of EnergyPoint Research. “Each of the top-rated companies in this survey demonstrated the unusual capacity to meet customers’ needs and expectations while managing through one of the most tumultuous periods on record in the industry.”

M-I SWACO, a global provider of oilfield fluids and fluids-related systems and services, ranked number one among oilfield service suppliers. In addition to its top overall rating, the company placed first in numerous regions, both within the U.S. and internationally. Other honors going to M-I SWACO, which is jointly owned by Smith International and Schlumberger, include first-place rankings for offshore, high-pressure high temperature (HPHT) and non-vertical wells, as well as for special applications.

“M-I SWACO has rated well in EnergyPoint Research’s surveys for several years now,” said Sheridan. “Respondents to the survey indicate the company has performed particularly well over the last 24 months, especially on the service side. Contributing to its strong showing are improved ratings for the company’s sales and field personnel, pre-job planning, service and professionalism, and responsiveness to requests for new technologies. The company also enjoyed notable scores for offshore applications, especially in the deepwater.”

According to Sheridan, Derrick registered some of the highest customer satisfaction ratings since EnergyPoint began conducting surveys in 2003. “Suppliers that are focused more narrowly on specific products and product categories tend to receive higher overall satisfaction marks from respondents than those with broader, or somehow less focused, sets of offerings,” said Sheridan.

Rating first overall in the category of land drilling is Helmerich & Payne, which owns a fleet of high-performance land rigs operating mostly in North America. The company also captured top rankings in three North America regions: Texas and Mid-Continent; Onshore Gulf Coast; and the U.S. Rocky Mountains. Other honors going to the Helmerich & Payne include first-place ratings in the areas of performance and reliability; technology; and health, safety and environmental (HSE). It also garnered the top rankings among larger multinational customers, as well as for special applications.

Noble Drilling ranked number one in offshore contract drilling, including deepwater applications and special offshore applications, and in two regions: Latin America & Mexico and the North Sea. Noble also ranked first in the category of HSE among offshore drillers.

The surveys succeed similar studies published by EnergyPoint Research in 2006 and 2007 and measure customers’ satisfaction in the industry across a range of attributes, categories and global regions. Evaluations were collected from customers of oilfield suppliers operating in multiple oil and gas producing regions, both in North America and international markets.

The second- and third-place spots were occupied by the following companies in their respective categories:

“Results from this survey are some of the most interesting we’ve observed since launching our ratings seven years ago,” said Sheridan. “Not only does the survey cover the period leading up to both commodity prices and corresponding demand for oilfield services reaching all-time highs, it also covers the subsequent precipitous drop in prices and demand later in 2008 and 2009.” Sheridan added, “To a large extent, the survey measures suppliers’ abilities to manage on behalf of customers in times of change.”

The oilfield services, oilfield products and contract drilling surveys were conducted as part of EnergyPoint Research’s 2008-09 industry-wide survey, which was comprised of more than 3,800 in-depth evaluations performed in 2008 and 2009 by domestic and international customers of oilfield suppliers. Respondents from both multinational and independent E&P companies, from all parts of the globe, were represented in the surveys. A total of 53 suppliers received the minimum number of evaluations needed to be ranked in the survey.

Industry suppliers and service providers were evaluated in various areas such as total satisfaction, pricing and contract terms, performance and reliability, technology, engineering and design, job quality, safety and environmental, service and professionalism, post-sale support and corporate capabilities. Suppliers were also evaluated across various product and service segments and domestic and international regions.

About EnergyPoint Research, Inc.
EnergyPoint Research provides independent research regarding the oil and gas industry’s satisfaction with the products and services it purchases and utilizes. Founded in 2003, the firm offers oil and gas industry professionals and their employers opportunities to both provide confidential ratings and customer feedback in areas important to oilfield product and service suppliers through objective and independent evaluation processes. For more information regarding EnergyPoint Research and its surveys and data, visit the company’s website at http://www.energypointresearch.com or contact the company at info@epresearch.com or +1.713.529.9450.