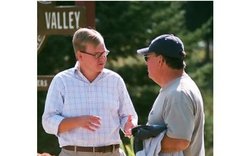 Dennis Lennox speaking with a resident.

Congressman Stupak threw the views of his constituents under the Mackinac Bridge for 30 pieces of silver.

Fueled by Stupak’s compromise on taxpayer funding of abortion this Sunday, which helped Congressional Democrats pass legislation overhauling the national health care system, Lennox announced the formation of his exploratory committee on March 22, 2010.

“Congressman Stupak is an example of why term limits are needed in Washington,” said Lennox. “He went to Washington with honorable intentions when I was in third grade, but he lost his way over the years. Congressman Stupak threw the views of his constituents under the Mackinac Bridge for 30 pieces of silver.”

Running on a platform of reducing government, cutting taxes, defending traditional values, protecting life, and improving education, Lennox’s solid résumé of public service sets him apart from his primary challengers.
In 2008, running on a platform of reforming local government, Lennox defeated a two-term Democratic incumbent to become Cheboygan County Drain Commissioner. He was one of two Republican challengers in all of Michigan to defeat an incumbent Democrat at the county-wide or higher levels.

After taking office, Lennox fulfilled his campaign promise to abolish the office of county Drain Commissioner, working with county commissioners and legislators in Lansing to develop a bipartisan proposal that would allow Cheboygan County to do-away with the office. His proposal was introduced as House Bill 5216 and Senate Bill 758.

Lennox's record includes a series of bipartisan amendments to the Michigan Constitution.
His proposals, introduced by Senator Michelle McManus as Senate Joint Resolution I in 2007, modernized government by removing obsolete and archaic provisions of the Constitution. Lennox's amendments overwhelmingly passed the Senate, achieving a final vote of 27-3.

Previously, Lennox represented Northern and Upper Michigan at the 2008 Republican National Committee and worked on the presidential campaign of former Massachusetts Governor (and Michigan native) Mitt Romney, helping him secure a Michigan victory in the 2008 primary. Lennox has also worked for Congressman Dave Camp and Senate Republicans in Lansing, and has served as chairman of Citizens Against New Taxes, a grassroots coalition advocating taxpayer rights and fighting tax increases on working families and small businesses.

For more information on Dennis Lennox for Congress, please visit http://www.lennoxforcongress.com or email lennox@raisedigital.com. You can also follow Lennox on Twitter at @DennisLennox.