Clutter Creep: The ‘Elephant in the Room’

Clutter is a subject many seniors would rather ignore, until too much “stuff” becomes a household hazard. But the dangers of a cluttered home have spurred the Home Instead Senior Care network to focus on efforts to help get seniors organized. 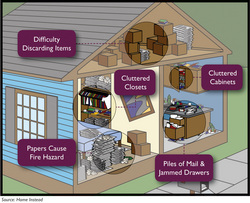 Perhaps they feel they can’t invite people to their homes anymore and they wish they could. Or maybe their grandchildren can’t come into their home because the problem is more serious.

Seniors are vulnerable to accumulating clutter for a number of reasons, according to University of New Mexico Researcher Dr. Catherine Roster, research director for the National Study Group on Chronic Disorganization. But whatever the reason they collect, older adults are increasingly at risk for many home dangers. They are susceptible to everything from falls to identity theft to unpaid bills and loss of important documents.

“Naturally, seniors have lived longer so they’ve had more time to accumulate stock piles of stuff,” said Roster, who is currently working on a clutter self-assessment tool that will help clutter collectors get to the root of their issues.

“Second, today’s seniors are more affluent, educated and active in the marketplace than past generations their age,” she noted. “The 50-plus market is the most sought after for high-end goods. They also enjoy online shopping. So you have a generation of seniors increasingly Internet savvy who may be prone to making online purchases late at night, which can make the clutter problem worse,” Roster added.

“Third, what makes seniors particularly vulnerable is that the objects they’re saving are their own legacies and memories,” she said. Seniors can become the memory bearers of three generations. They not only have their stuff and their children’s, but objects they’ve inherited from their own parents.

“You talk about the sandwich generation, and it’s happening to their clutter,” Roster explained. These objects represent multi-generational meanings and life stories, and seniors feel a strong responsibility to carry on the tradition and bequeath them to others, according to Roster.

Sometimes clutter begins to accumulate in places like garages and storage sheds. “That’s when the inventory creep becomes an issue of out sight, out of mind. It’s sort of the elephant in the room,” Roster said. “People don’t want to acknowledge there is a problem, which creates an underlying anxiety, stress, guilt or embarrassment that can have a negative effect on their mental health and productivity,” she added.

Why not help seniors in your life de-clutter as part of a spring home clean-up, suggests Paul Hogan, co-founder and CEO of the Home Instead Senior Care network. “We suggest a three-step plan where the family caregiver brings three bins -- one for the stuff the senior wants to keep, one for donations and the other for trash. Sometimes seniors just need a little help.”

Research is playing a role in the solution as well. As research director for the National Study Group on Chronic Disorganization, part of clutter researcher Roster’s job is to find out what motivates clutter collectors. “We are now developing a self-assessment tool that will help individuals gauge how clutter is affecting their quality of life,” she said. “Observations from professionals have helped, but what we don’t have yet is the other side of the coin. The real obstacle is not the clutter, but the individuals themselves. We need a better way of understanding their level of knowledge and how to help them get to that state of acknowledging that this is a problem in a number of areas of life,” Roster said.

Hopefully this tool, which will be ready for use by 2011, can start seniors thinking about not only their safety, but relationships with their family and friends. “Perhaps they feel they can’t invite people to their homes anymore and they wish they could. Or maybe their grandchildren can’t come into their home because the problem is more serious.”

“Older adults might not realize the true hazards that threaten their own safety and well-being. This tool will be designed to help them start thinking about making changes. And that will be welcome news for both seniors and their family caregivers.”

For more information and resources to help seniors de-clutter, link to the Home Instead Senior Care Breaking Point resources.