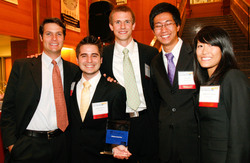 The prize was awarded at the Wharton School’s annual Venture Finals, April 28, 2010, where student finalists received more than $75,000 in combined cash prizes and in-kind legal/accounting services.

Cortical Concepts has filed a provisional patent for not only its device but for its method of applying an anchor--similar to drywall anchors used in home building--to bone screws used in spinal surgery. Its advisors include the Co-director of Spine Surgery at Johns Hopkins University.

The Venture Finals, which is the year-long Competition’s culminating event, attracted nearly 350 venture capitalists, business leaders, faculty members and students.
For the first time ever, three $1,000 awards were bestowed by the student management committee of the Wharton BPC. The committee awarded prizes in the following categories: “social,” “global,”` and “committee’s choice.”

In fact, at least seven of the grand prize winners from the past decade are still in business with several earning millions in revenue and/or financing. Information about past participants is available on the Wharton BPC Web site: http://bpc.wharton.upenn.edu.

About the Wharton School and Wharton Entrepreneurial Programs

In 1973, The Wharton School became the first school to develop a fully integrated curriculum of entrepreneurial studies. Today Wharton, through Wharton Entrepreneurial Programs , supports and seeds innovation and entrepreneurship globally through teaching, research and outreach to a range of organizations through its many programs, initiatives and research centers. At the same time, Wharton students and alumni are helping to build entrepreneurial enterprises around the world and impacting virtually every industry.

The Wharton School of the University of Pennsylvania — founded in 1881 as the first collegiate business school — is recognized globally for intellectual leadership and ongoing innovation across every major discipline of business education. The most comprehensive source of business knowledge in the world, Wharton bridges research and practice through its broad engagement with the global business community. The School has more than 4,900 undergraduate, MBA, executive MBA, and doctoral students; more than 9,000 annual participants in executive education programs; and an alumni network of 85,000 graduates.

For more information on the Wharton Business Plan Competition, go to: http://bpc.wharton.upenn.edu.