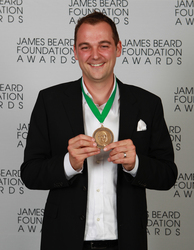 “We’re very proud of Daniel and our partnership with him, and are thrilled he has been recognized by the James Beard Foundation as New York City’s Best Chef,” said Victorinox Swiss Army, Inc. President, Rick Taggart. “Daniel is a supremely talented chef and we are honored that he chooses our brand and professional line of cutlery.”

Victorinox Swiss Army officially began its partnership with Chef Daniel Humm in December 2008, however, Humm has been using Victorinox Cutlery since he was an apprentice chef at fourteen-years-old in Switzerland. He continues to use Victorinox Cutlery in his professional kitchen today. Humm is the Executive Chef at the four-star restaurant, Eleven Madison Park in New York City.

“I am honored to receive the James Beard award and so incredibly proud of my entire team at Eleven Madison Park,” said Executive Chef, Daniel Humm. “At the restaurant, we strive to create an excellent experience for our guests, and in the kitchen, we could not do this without having access to the best ingredients, equipment and tools, including Victorinox Cutlery. I have been using Victorinox Cutlery since I was a young man, when my parents gave me a block set to properly equip me for my culinary apprenticeship. It is essential for me to work with tools that are reliable and offer complete functionality, which is why I feel so confident about representing the Victorinox brand.”

Victorinox has been manufacturing fine cutlery in the tradition of precision and craftsmanship for over 125 years. Known for its proprietary razor-sharp edge, quality and performance, Victorinox offers Stamped, Forged and Ceramic Collections with a choice of Fibrox, Rosewood, Poly and POM handles. Perfectly balanced with high carbon stainless steel blades, Victorinox Cutlery is as comfortable in the hands of culinary professionals every day as it is in the kitchens of at home chefs.