Calling All Optimists! Life is good® Aims to Raise $1 Million for Kids

Life is good®, a Boston-based company that spreads good vibes through its colorful collection of apparel and accessories, will host a two-day music festival with the goal of raising $1 million to heal and strengthen children facing life-threatening challenges, including violence, illness, and extreme poverty. 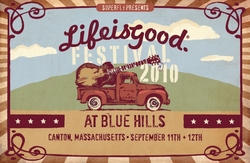 2010 Life is good Festival will raise $1 million for kids

The Life is good Festival will not only help us spread joy to the thousands who attend, but most importantly it will help thousands of the most vulnerable children,” said Bert Jacobs, Life is good co-founder and chief executive optimist.

Life is good®, a Boston-based company that spreads good vibes through its colorful collection of apparel and accessories, will host a two-day music festival with the goal of raising $1 million to heal and strengthen children facing life-threatening challenges, including violence, illness, and extreme poverty. The festival will feature a first-of-its-kind fundraising component, rewarding festival attendees who raise money for the cause with special VGP perks and privileges (Life is good’s version of a VIP is a VGP – a Very Good Person).

The 2010 Life is good Festival at Blue Hills will feature nationally-known musical talent, good food, games, activities and art projects. The multi-stage festival will take place September 11 – 12 on historic and picturesque Prowse Farm at the foot of the Blue Hills in Canton, Mass., a suburb of Boston. The location is fully accessible via public transportation, with all-day shuttles to and from the nearby Rte. 128/University Avenue train station. A large number of free parking spots are also available. Designed for optimists and all those who aspire to see the glass half-full, the festival will feature two days of first-quality musical talent on three stages. Every age will find top-notch musicians, including children and their parents, who will be treated to several of the nation’s best-known children’s performers. The line-up will be announced soon.

To ensure a top-quality festival experience, Life is good has partnered with Superfly Productions, the nationally recognized producers of the iconic Bonnaroo and Outside Lands festivals. Bonnaroo is about to open the gates to its ninth annual event and has had many world-class legends grace its stage over the years including Bob Dylan, The Dead, Neil Young, James Brown, Bruce Springsteen and the E Street band, Radiohead, Pearl Jam, Dave Matthews Band, Phish and many others. Superfly also has a great deal of experience with and has won awards for its greening initiatives. From alternative energy sources to extensive composting and recycling programs to environmental education and the promotion of healthy living, Superfly will be putting its years of knowledge into practice at the 2010 Life is good Festival at Blue Hills.

Through its nationally-known festivals, Life is good has attracted more than 375,000 people and raised over $3 million to date for children in need. In 2010, for the first time, Life is good has set a goal of $1 million raised through ticket sales and a unique approach that ties charitable fundraising to extraordinary VGP (Very Good People) opportunities for attendees.

“We are taking our Life is good Festival to a whole new level this year,” said Bert Jacobs, Life is good co-founder and chief executive optimist. “Doing so will not only help us spread joy to the thousands who attend, but most importantly it will help thousands of the most vulnerable children in the Greater Boston area and beyond. We also believe that the power of a community coming together around a good cause and the spirit of volunteerism on display will allow us, on this important date, to honor the memory of those lost in the tragedy of 9/11.”

Every festival attendee will have the opportunity to access exclusive hospitality, preferred viewing, artist meet and greets and other prizes by achieving fundraising goals or making a donation to help kids in need. The top fundraisers will be called VGP’s – Very Good People – and will have a once-in-a-lifetime concert experience.

Life is good will donate 100% of its profits from ticket sales, sponsors, and onsite apparel and merchandise sales to the Life is good Kids Foundation. All public donations, including individual fundraising prior to the event, will also be directed to the foundation. The Life is good Kids Foundation is a registered 501©3 nonprofit committed to healing and strengthening young children deeply impacted by life-threatening challenges such as violence, illness, natural disaster and/or extreme poverty. Its Playmakers initiative provides training, resources and support to the adults dedicated to caring for these children so that all involved lead healthier, more joyful lives.

About Superfly
Superfly Productions was founded in New Orleans in 1996 by Kerry Black, Rick Farman, Richard Goodstone and Jonathan Mayers. Originally set up to become the leading independent local concert promoter, they created the Superfly During JazzFest series, which is now in its 14th year. In 2002, they co-founded and continue to produce the iconic Bonnaroo Music & Arts Festival. Since its inception in 2002, Bonnaroo swiftly earned its status as the country’s premier music and arts event and Rolling Stone called the festival “one of the 50 moments to change the history of rock and roll.” Bonnaroo has featured a staggeringly diverse range of world-class acts such as Bob Dylan, Bruce Springsteen and the E Street Band, Metallica, Neil Young, Radiohead, Jay-Z, Willie Nelson, The Police, Snoop Dogg, Pearl Jam, Tom Petty, The Dave Matthews Band, James Brown, The White Stripes, Erykah Badu and The Dead, among so many others. Bonnaroo has also made a large impact on the comedy industry, featuring some of today’s best comedians working today, including Chris Rock, Lewis Black, David Cross, Aziz Ansari, Conan O’Brien, Zach Galifianakis and so many more. In 2008, Superfly co-founded the acclaimed San Francisco-based Outside Lands Music & Arts Festival. The company is also involved in artist management and has created the Superfly Marketing Group, a boutique entertainment-marketing agency designed to complement Superfly’s diverse divisions. Superfly Marketing Group leverages the company’s experience, expertise and industry relationships to develop brand partnerships geared towards the passionate entertainment and lifestyle consumer.