Esimit Europa Sailboat, a Symbol for the United Europe

Sponsored and supported by numerous European institutions, the 30-meter sailboat is among the fastest boats in the world and an ambassador for European Energy. Igor Simcic from Slovenia is the project’s leader and the father of the idea behind it. The crew includes Olympic Games competitors and World Champions. 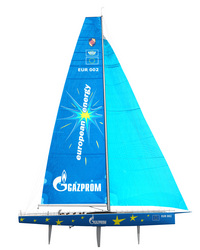 The Fastest Boat on the Planet

The new Esimit Europa 2 sailboat symbolizes a powerful online movement to improve the quality of life in Europe.

The new Esimit Europa 2 sailboat will be introduced to the global audience at its christening ceremony in Cannes on June 10, 2010. Endorsed by José Manuel Barroso, President of the European Commission, and a number of other European institutions, the 30-meter giant will bring the colors of Europe to the most prestigious sailing competitions. The Esimit Europa project (http://www.esimit.com) has been a symbol of blurring borders and connecting nations. The project gained a whole new dimension with an all-star crew and support from European Energy (http://www.european-energy.org), a powerful online movement to improve the quality of life in Europe.

“With one of the most sophisticated sailing boats in the world and an outstanding crew, which includes many Olympic Games competitors and world champions, we are planning to win the Europe’s most prestigious races,” Igor Simcic, Esimit Europa project manager and father of the project idea, explained the team’s sport goals. “However, this is just a piece of the mosaic that is our project,” added Simcic. “Our hope is for the boat to energize all Europeans and to foster dialogue and cooperation. At the same time, the boat will act as an ambassador of the online environmental movement, European Energy, and motivate people to focus their energy on the actions that will improve our lives in the future.”

Igor Simcic is convinced that the world of sailing is not just about competing. Instead, sailboats can represent individual continents and countries, connect them and contribute to a better future. In 1995, with the help and support of the mayors of the Slovenian Nova Gorica, where Igor lived, and the Italian Gorizia, where he worked, he launched the Esimit Gorizia & Nova Gorica international project. From the very beginning, the Esimit sailing boat symbolized a friendship that stretched across boundaries and gradually became increasingly European.

The project grew through excellent results at notable European sailing races and support of numerous project supporters. In 2001, the time was right for including other European countries into the Esimit project. Simcic’s vision came true in 2002, when the European Parliament pledged its support for his sailboat. Since 2004, the 19-meter boat’s crew is participating in yacht races under the flag of the European Union. With EU logos on boat sides of the hull, the new boat truly symbolizes the unified European Union.

The project is also sponsored by Gazprom, a leading energy company, and Medot, a brand of exclusive sparkling wines. Slam is the official equipment supplier for the team.

The Fastest Boat on the Planet