San Jose Parks Foundation is launching ParkForce, its inaugural membership campaign, which will offer San Jose residents the opportunity to provide private sector support to protect and preserve the city’s many public parks and trails. "The coming budget cuts could have a negative impact but by building a strong ParkForce membership, we can protect and preserve – and in some cases enhance – our parks and trails." ParkForce basic family memberships start at $60 and are now available online. Citizens may join ParkForce online at http://www.sanjoseparks.org. 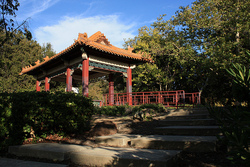 The pagoda at Overfelt Gardens is one of San Jose's uniquely beautiful parks.

The coming budget cuts could have a very negative impact on all city parks. By building a strong ‘ParkForce’ membership we can protect and preserve – and in some cases enhance – our parks and trails.

San Jose Parks Foundation announces today that it is launching “ParkForce” its inaugural membership campaign. The campaign is being launched through direct mail, online and in targeted public parks and plazas throughout San Jose.

ParkForce memberships are available to anyone who donates to the foundation. Basic Memberships begin at $60 for a Family. Associate Memberships begin at the Trailblazer level of $125. All funds raised by San Jose Parks Foundation will support programs, services, and capital needs of San Jose’s public parks, trails and community centers.

In announcing the ParkForce campaign, San Jose Parks Foundation Executive Director, James Reber, states, “The people of San Jose have a chance to act before the budget cuts have their impact. Parks have a profound impact on many aspects of our lives, from the health of children and seniors to the look and feel of a neighborhood to property values.”

Mr. Reber believes that by working together in partnership with other community groups, neighborhood associations, and volunteers, “The coming budget cuts could have a very negative impact on all city parks. By building a strong ‘ParkForce’ membership we can protect and preserve – and in some cases enhance – our parks and trails. The work of the Friends of San Jose Rose Garden proves that a community effort can be a force for good in our city parks.”

The Board includes a few ex-officio members, including Albert Balagso, San Jose’s Director of the Department of Parks, Recreation and Neighborhood Services. There is a Community Advisory Board and a City Advisory Board, which currently have 16 members. Advisory Board members bring special skills and interest to the foundation.

“Parks contribute to San Jose’s quality of life. People of all ages, incomes and ethnicities throughout the city enjoy their recreational amenities," said San Jose Parks Foundation Board President Dan Pulcrano. “It’s critical in these economic times that we have a funding resource to maintain the city’s park system.”

Residents and businesses in San Jose have patiently watched as budget cuts have taken their toll on a variety of city programs. The current deficit projections mean even deeper cuts for San Jose’s department of Parks Recreation and Neighborhood Services (PRNS). Anticipating that this might happen, PRNS took action a few years ago to help organize and fund the San Jose Parks Foundation, which brings private funds to public parks.

Board Secretary Helen Chapman has been involved in the creation of San Jose Parks Foundation from its beginnings as an idea, through a community process, and as a Steering Committee member and Board member for nearly two years. “I have waited to see this organization come to fruition. It offers citizens direct input into the quality of their parks and trails.”

San Jose Parks Foundation is not yet funding projects, which will be its primary purpose once the organization is in full operation. According to Executive Director James Reber, that will be toward the end of this year. In the meantime, the process and policies are being established.

“Even without funds, we can provide valuable help to our parks,” adds Reber, who has already begun working with a few community groups to help guide them toward sustainability. “This includes acting as a Fiscal Receiver for qualified community groups who need to have a legal nonprofit entity in order to accept donations, as well as providing organizational and fund raising training.”

San Jose Parks Foundation asks that anyone and everyone in San Jose who cares about the parks and trails will become a member of ParkForce. There is also a need for volunteers to help with a variety of projects.