There Oughta Be A Law: NY Poised to Lead U.S. in Fight to Stop Workplace Bullying

Years of tirelessly walking up and down the long winding halls of Albany's state capitol may finally pay off for victims of severe psychological harassment who are lobbying for the right to sue their abusive employers. Their stories and others are featured in the online documentary, NoJobIsWorthThis.com 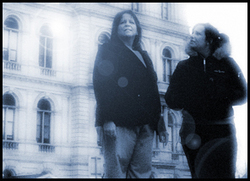 "it is a hopeful sign that during this age of bitter political partisanship, senators from both sides of the aisle had the humanity and good sense to recognize that psychologically safe workplaces benefit us all."

New York’s State Senate recently passed landmark legislation that steps up the fight against bully bosses. But, traumatized workers won’t find relief until the Assembly side of the state legislature passes its own version and the Governor signs off. Not an easy task.

This struggle is part of a national effort by the Workplace Bullying Institute's Legislative Campaign and makes up the heart of the online documentary, THERE OUGHTA BE A LAW: NoJobIsWorthThis.com produced by award-winning filmmaker Beverly Peterson.

Mike Schlicht and Tom Witt, State Coordinators of New York Healthy Workplace Advocates, have spearheaded and led the Albany effort for several years and the sudden swift movement by the State Senate took them by surprise. They call it "a hopeful sign that during this age of bitter political partisanship, senators from both sides of the aisle had the humanity and good sense to recognize that psychologically safe workplaces benefit us all."

Also highlighted on Peterson's website is a tragic story from Wisconsin. Barely 31 years old, Jodie left behind 2 young children, a loving husband and devastated relatives and friends. Lisa and her family struggle to understand why her sister's supervisor "kept badgering her and backing her into a corner...my sister just felt helpless." Along with the videos, the site offers visitors a chance to post their own stories, as well as links to resources, articles, and research studies. In June, Peterson travels to Cardiff, Wales to present her work at the 7th International Conference on Workplace Bullying & Harassment.

State Senator Thomas Morahan, the bill's Senate sponsor, is not seeking re-election and his office says they hope there's enough pressure to speed the bill through the Assembly before the end of this session. Schlicht says he feels confident about a vote since the advocates are "just two sponsors short of having one third of the Assembly signed onto their version of the bill." But before that can happen, it still has to make it out of the Labor Committee where it's been stuck since last year. The Wall Street Journal reports that the committee's chair, Susan John, feels it may drive business out of the state. And, what the Governor will ultimately do is up in the air. This time last year, he cited budgetary constraints and vetoed a bill to study how to legislate hostile work environments. Had he put his pen on the dotted line the study results would be in place right about now to help guide lawmakers toward a legal solution.

Beverly Peterson's documentaries have been broadcast internationally, and screened at major festivals including; HBO, PBS The Sundance Channel,The Sundance Film Festival, Human Rights Watch, Museum of Modern Art, Brooklyn Museum of Art,The Walker Art Center, The Warhol Museum, The Kitchen. 71 West Broadway: Ground Zero, New York, NY was selected as part of the memorial presentation at the Library of Congress, which has included it in the national 9/11 film archive. Portions of Invisible Revolution, were featured on ABC’s 20/20, Dateline, and HBO specials on domestic terrorism.