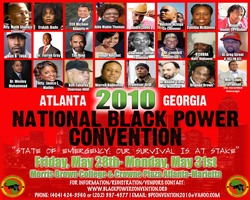 "THE NATIONAL BLACK POWER CONVENTION WILL NOT BE BEGGING PRESIDENT OBAMA TO DO FOR BLACK PEOPLE WHAT WE MUST DO TO DEFEND AND DEVELOP OURSELVES."- Convention Convener Attorney Malik Zulu Shabazz- New Black Panther Chairman/ Black Lawyers For Justice

TIME OF NEWS CONFERENCES: Monday May 24th 1:00 PM and Wednesday May 26th at 1:00pm. Organizers will be present.

TIME OF CONVENTION: Friday, May 28th through Mon May 31st

Workshops on Saturday and Sunday Begin at 10:00 am and Premier Convention Rally on Saturday May 29th begins at 6:00pm.

Over 50 National Leaders and Organizations will attend.

On Monday May 31st A Major Youth Power Rally will take place with popular artists Erykah Badu, Andre 3000 and other Major National Entertainers.

The New Black Panther Party has been embroiled in a battle between Republican Congressmen and the U.S. Department Of Justice battle over a ”voter intimidation” scandal for the last 18 months. During these 18 months right wing and Republican Newspaper and Electronic media have gone to exhaustive lengths to discredit and slander the New Black Panther Party and its Chairman and Attorney Malik Zulu Shabazz.

Despite the controversy the New Black Panther Party continues to grow and expand. The National Black Power Conventions impressive lineup of guests and organizations is a testimony that the New Black Panthers Leadership has support in wide circles in the Black Community, particularly amongst grassroots organizers and entertainers.

“With the rise of the Tea Party, the white-right and other racist forces. With gun sales nationwide at an all time high amongst whites, with a mood that is more anti-Black than any time recent, it is imperative that we organize our forces, pool our resources and prepare for war!” Chairman Malik Zulu Shabazz, Esq. Convention Convener and Party Chairman.

“This Years Convention will be better than ever because of the quality of presenters and the depth of the workshops and speakers.” Minister Hashim Nzinga, Convention Co-Convener and Party Chief of Staff.

The Rallies, Teach Ins and Workshops will focus on the following issues: Black Politics in the Obama era; the attack on education; youth and gang violence in the Black Community; police misconduct and brutality; high incarceration rate amongst Black Men; Africa and the African Diaspora; self defense; the health crisis and host of hot button subjects:
Please Download and see the attached Schedule of events for the National Black Power Convention. http://www.blackpowerconvention.org