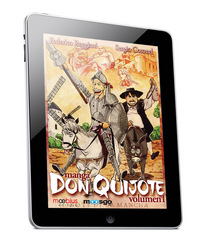 Moosgo is the first Hispanic digital publishing in developing content as Apps exclusively for iPhone, iPod Touch and iPad

"Don Quixote, one of most popular and recognized works in spanish language arrived to iPad through Moosgo. The IPAD is specially designed for content consumption, among which are the comics. So it seemed an excellent opportunity to make this release, spreading around the world and through one of the most innovative device like the IPAD, "said Cristian Parodi, Director of Moosgo.

Moosgo is the first Hispanic digital publisher in the country to produce content exclusively as apps for Apple´s device. Its catalog includes comics, ebooks, audiobooks, illustration, animation, books and novels.

Other Moosgo´s Apps can be obtained from: