Nation introduces a new Silver-based currency to avoid the fallout of the failing US Dollar. 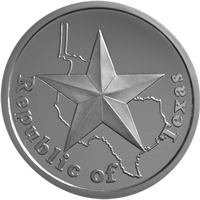 "This is just the beginning; we don't intend to sit on our hands and watch our nation and the U.S. drift into financial slavery.”

As the U.S. federal government increases its pressure on states and individuals working to reclaim rights guaranteed by the U.S. Constitution, the response from the freedom movement varies across the U.S., from the subtle “Tenth Amendment” resolutions to the re-awakening of state militias.

But to the south, the republic of Texas nation has taken a slightly different, yet more pro-active and hands-on approach.

“Everything's bigger in Texas,” says District 8 senator Robert Wilson, “especially our will to resist tyranny. Remember the Alamo? We won nationhood by international treaty in 1836 when we soundly defeated Mexico's president Santa Anna and his armies at the battle of San Jacinto. And since the U.S. Constitution doesn't grant congress the authority to 'annex' another nation by a 'resolution', we stand on a solid lawful foundation to enjoy all the rights God granted us, like establishing our own separate economic system.”

While the rest of the country's economic outlook turns more bleak by the day, the republic of Texas's elected government implements precautionary measures to weather the storm. “Our three-tiered approach keeps us virtually unaffected by the federal reserve's inflationary policy: we store our nation's wealth in Silver, trade Silver with local vendors as often as practical, and help Texians ditch the sinking U.S. dollar by providing a cost-effective method to revert to the republic of Texas national metal currency, modeled from our currency of the 1800's.”

Wilson, who is on the nation's Depository Committee, views the strategy as a proportional response to the U.S. federal government's recent rumblings regarding Americans' right to own guns and organize local militias. “They don't want us to have the means to protect ourselves. What are they afraid of? We must protect the Texian people with our independent silver-backed system, immune from their fraudulent and inflationary manipulation.”

The basis for the new Silver currency is established in partnership with the American Open Currency Standard, an organization most well known for the design of a similar economic system built for the Lakota Nation and the Free Lakota Bank.

"We are delighted that the republic of Texas selected the Open Currency standard for their new currency,” says Rob Gray, Executive Director. “This is a major accomplishment for our mission and a huge step in the direction of an honest system of trade not just for Americans, but also for nations across the world.” Gray's group helps communities mint precious metals for local currencies and barter purposes.

Future plans for the republic include recruiting manufacturers and producers to trade with the government and Texians, as well as the establishment of a metals 'bank' to facilitate commerce and create an opportunity for loans and investment. Wilson concludes that more is to come: “The rest of the world is invited to join us in this historic project by purchasing our Silver currency and investing in our first depository. This is just the beginning; we don't intend to sit on our hands and watch our nation and the U.S. drift into financial slavery.”

For more information, visit the republic of Texas website at http://www.texasrepublic.info