Buenos Aires Surfaces as the Art Capital of the World

By Stan Zipperman, Art Critic At Large For Art Collectors Website (http://www.artcollectorswebsite.com) Buenos Aires is in the midst of a highly-charged historical "cultural arts Renaissance" which has been years in the making. To those art aficionados who have their fingers on the pulse of the global art scene, this realization comes as no surprise whatsoever. 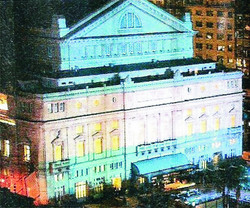 "When people of one mind and one soul gather together in solidarity, this is the magic you see happening before your eyes. We appreciate the passion and enlightenment of the Buenos Aires artscape."

Buenos Aires is in the midst of a highly-charged historical "cultural arts Renaissance" which has been years in the making. On May 24, 2010, over three million people converged on Avenida 9 de Julio to celebrate the 200th bicentennial of the city and the gala re-opening of the famed Colon Opera House, which had been closed for four years during a complete and costly renovation. Not since Evita Peron's fable funeral in 1952 have such large crowds gathered in the streets of Buenos Aires for a single cultural event.

To those art aficionados who have their fingers on the pulse of global art scenes, this kind of outpouring in Argentina for such a pomp and circumstance event comes as no surprise whatsoever.

Make no mistake about it, the evidence has been mounting and well-chronicled for some time concerning Buenos Aires' cultural revival! Numerous events in the city over the past several years have been confirming this important development all along. Whether by divine design or happenstance, a series of events, experiences and efforts have been taking place in the capital of Argentina.

It is as if co-ordinated cultural formulas for success have been achieved on all fronts in a timely order. To simplify a rather dynamic overview, one could argue that the new surge began about four years ago when the Colon Opera House closed its doors.

Since that time, orchestrated by efforts of several government agencies, foundations for the arts, and world-wide developments, a revival of cultural interests and expressions has mushroomed in Buenos Aires and has been opening doors to this new era. It stands to reason that the Colon, with new state-of-the-art
enhancements, is perhaps the premier opera venue on the earth.

The influence of world affairs seems to have played perfectly into Buenos Aires´ historical Renaissance. While New York was losing its luster under economic pressures and scandals and Paris was taking an extended siesta, Buenos Aires was discovering a new luster and brilliance of its own.

It´s about time that some myths have been questioned and critically challenged. Since when does a high-priced art auction at Christie's or Sotheby´s in New York or London for a night or two --- an art scene make? And doesn't it matter that the paintings commanding those prices were painted some time ago by artists born some time ago in Spain or Italy?

And how many decades have long passed, or generations have gone on by for that matter, since one could stroll through the Latin Quarter of Paris and run into Picasso, Hemingway, Stein or Dali? A myth by any other name is still a myth. That era was then; this era is now!

An art scene needs to be more than a myth to remain a reality. It needs a pulse. Buenos Aires has that pulse, plus it has the soul and the spirit!

The San Telmo district, which held the reign for the "avant garde" movements in the past, still maintained its soul and its spirit, plus its stature and its reputation in the transformation. But all Buenos Aires' zones were realizing new interest and awareness in the arts, thanks in part to tourist information kiosks established all over the city and a myriad of cultural events sponsored by countless cultural foundations and city government agencies designed to make public access to the arts most affordable.

In the art scene itself, what appears to be emerging now in San Telmo among the younger artists, native and foreign, is a resurgence and reverence for American surrealism, influenced and inspired by the artworks of American cult artist Jim Warren and the surrealism icon Salvador Dali on one hand, and pop art idol Andy Warhol on the other. One such advocate in the forefront of the movement is 36-year-old artist "Remo" Molina, who is gaining much attention in San Telmo art circles as a "cross between Dali and Escher." His detailed art is described as dealing with "the metaphysical mystique in explicit sexual imagery."

But the new cultural revival, which is now truly unequalled anywhere in the universe as we know it, is all encompassing in its scale and scope.

In the theatre scene alone, many original, grand-scale musical productions were mounted on Avenida Corrientes, "the Broadway of Latin America," within the last two years, including Tanguera, Eva, Che, Dracula, Othello, Caravan, and 1001 Nights, as well as Broadway-quality productions of established world-wide works as Piaf, rent, Cabaret and The Phantom of the Opera.

And it doesn't stop there. There is talk that a diverse project like the world's first punk rock opera, "EVERYHEAD," may be headed for a Corrientes stage in the near future or even possibly for the Colon itself. So, in evaluating the circumstances, it is likely that Corrientes Avenue is perhaps now the ruling theatre center of the world with its many theatre sites and high-calibre offerings.

In music and dance, Buenos Aires is all thumbs up! The Tango is Buenos Aires! It is emerging step in step as a major performing art form and evolving in both sight and sound (electronically speaking) in fascinating if not in downright controversial directions. Tango "street festivals" abound and have often filled thoroughfares such as Av. de Mayo with many performers from beyond Argentina's borders.

On the film horizon, the Argentine film, "El Secreto de sus Ojos" has won about every award it was qualified to win. The Palermo zone even has a section officially called "Palermo Hollywood," where film making is thriving with new energy and enterprise.

For years, Arte BA, a well-received international annual event, has attracted record-setting crowds of over 100,000 art lovers thirsting to discover everything new in the arts and has earned a respected reputation in B.A.'s "cultural arts Renaissance."

While they are seldom mentioned as part of an art scene, they dazzle the eye, and the closer one gets, the better they look. I am speaking of the magnificent and majestic monuments in public parks which suddenly appear any direction you turn. More than simply photo opportunities, these magnificent monuments are an equivalent to an outdoor sculptural museum.

The MALBA (the Museum of Latin American Art Buenos Aires), renowned in and beyond two hemispheres for its first-rate collection of Latin American paintings and sculpture, recently held a grand-scale salute to Andy Warhol, which became another one of its applauded tour-de-force exhibitions.

But the city is continuously and aggressively hosting international art festivals and exhibitions involving all aspects of artistic expressions and endeavors. Without a doubt, even with its civil protests du jour littering the streets, few other cities have a vibrant cultural scene that can make so many claims across so many fronts and frontiers.

David Rose, spokesman for Art Brokerage.com, a U.S. based international art dealer with 1/2 billion dollars (USD) in artworks available online, issued this statement: "When people of one mind and one soul gather together in solidarity, this is the magic you see happening before your eyes. We appreciate the passion and enlightenment of the Buenos Aires artscape."

Yes, indeed, to quote Bob Dylan, "the times, they are a-changin.'''