For years, self-help books have been all the rage. Today more than ever, people are turning to books on attaining success to help them get back on their feet. While these books may seem to be easily lumped together, a recent discovery by Steve Paris, CEO of Orne Publishing, is about to turn the self-help world upside down… and it could quite possibly take everything else with it. 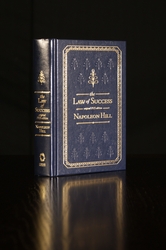 Your big opportunity may be right where you are now. Napoleon HIll

For the first time in history, Orne Publishing has made available to the public The Law of Success Original 1925 Edition by Napoleon Hill. This original version is a vital and powerful tool for anyone who wants to attain success in their life—from students still charting their paths, to CEOs looking to bring their companies to an entirely new level.

In a small, rare bookshop in Arkansas, Paris stumbled upon the original self-help book from 1925. The book was written by Napoleon Hill and is titled The Law of Success. Today, elements of the fifteen principles Hill discusses in The Law of Success form the foundation on which all other self-help books are built. As a testament to Hill and the validity of his work, he was recruited by President Roosevelt during the Great Depression to help pull America up from the depths of despair. If Hill was able to do that, one can only imagine what studying his principles of success could do for themselves.

The story behind The Law of Success begins in the early 20th century, as one of history’s greatest philanthropists—Andrew Carnegie—was nearing the end of his life. Carnegie wanted to give back to the world by publishing a book that would bring the secrets of success to the masses. To carry out his vision he commissioned Hill, a young reporter at the time, to study and interview 100 of the most successful individuals in the United States. After more than twenty years of extensive research, Hill finally released a limited number of hand-made copies of The Law of Success. This great work reveals the secrets of how the most accomplished men of the day attained their own success.

However, once these remarkable men realized how powerful the information contained within The Law of Success was, they stopped Hill from releasing it to the masses. Not wanting his years of research to go to waste, Hill subsequently released the widely popular book Think and Grow Rich, a watered-down version of his original masterpiece. Years later, the principles within Think and Grow Rich were used as the basis for popular books like The Secret and The Law of Attraction. Recently, such books have been criticized because the true way to achieve success is not as simple as they make it out to be. Fortunately, Hill’s original manuscript fills in these gaps and offers a complete guide to success based on fifteen principles rather than just one.

Today, The Law of Success is still considered a blueprint to personal success and financial abundance. The book not only discusses these principles, but offers its readers the opportunity to study and encompass them within their daily lives in order to bring their own aspirations within reach. The book, which was originally released in fifteen smaller booklets, is now available in one hard-covered collector’s edition.

Founded by current CEO Steve Paris, Orne Publishing was launched to bring this exceptional work by Napoleon Hill to the public. Paris, who discovered the original book in a rare bookshop in Arkansas, felt it would be unfair to keep these secrets to himself. Thus, in order to do Hill and his tireless work justice, Paris attained the rights to the book and established Orne Publishing. More recently, Orne Publishing has developed a series of products and services to support The Law of Success Original 1925 Edition. Amongst these, “Continued Success” is a monthly audio series containing interviews with some of today’s most successful individuals—including Mark Victor Hanson, author of the Chicken Soup for the Soul series—which demonstrate the timelessness of these principles.