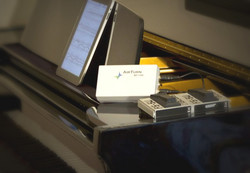 In the many years of having the added stress of turning pages, the AirTurn is a most welcome addition to the concert and recording platform. It is a unique device which enables us to play seamlessly as though we are not using the score.

AirTurn, Inc. is introducing a first look at its prototype Bluetooth BT-105 page turner footswitch for the iPad and other Bluetooth-equipped computers. While the iPad is a terrific tool for reading digital sheet music, its functionality is actually hampered by the need to touch or swipe the screen to turn pages. For musicians who need both hands to play their instruments, removing a hand to momentarily touch the screen for page turns can be distracting at best and disruptive to the music at worst.

The AirTurn BT-105 automatic page turner footswitch is being designed for musicians who need to turn sheet music pages hands free. The AirTurn BT-105 connects wirelessly to an iPad or other Bluetooth-equipped computer and is triggered by foot switches to turn pages forwards and backwards. Some apps and programs that feature half page zoomed views of the music will also feature the ability to turn pages with the Bluetooth AirTurn half a page at a time. The final version of the AirTurn BT-105 will be miniaturized.

By allowing musicians to keep their hands on their instrument at all times, the Bluetooth AirTurn makes computers and tablet devices like the iPad fully usable as digital sheet music readers. Page turns are almost "magical" and completely discreet with a simple tap of the foot, allowing musicians to fully focus on the music itself.

AirTurn, Inc., a Boulder, Colorado based company, creates and markets technologies to enhance the study, practice and performance of music. Airturn was formed in 2008. Its co-founder and VP of Communications, Hugh Sung, is also a professional pianist on the faculty of the world-renowned Curtis Institute of Music and one of the most sought-after collaborative pianists in the classical music field.

More details on AirTurn and its current line of page turning systems can be found at AirTurn's website.

"In the many years of having the added stress of turning pages, or having someone do so in performance, the AirTurn is a most welcome addition to the concert and recording platform. It is a unique device which enables us to avoid the extra worry, and play seamlessly as though we are not using the score. In time, more artists will discover this wonderful invention and incorporate it into their performances." - Jeffrey Biegel, Concert Pianist

Flutist using an AirTurn footswitch to turn pages on an iPadDigital sheet music pages can be "turned" forwards and backwards hands free with the two footswitches attached to the AirTurn page turning transmitter.

Compatible with Mac and PC computersThe AirTurn will work with most Mac and PC sheet music viewing programs, as well as standard PDF viewers and presentation programs such as PowerPoint and Keynote.

Jeffrey Biegel, Concert Pianist and AirTurn userJeffrey Biegel is one of the most acclaimed and sought-after pianists of our generation. Mr. Biegel regularly performs with orchestras around the world, and is a prolific recording artist. His compositions and arrangements are also published by the Hal Leonard Corporation.