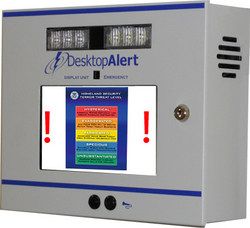 "Desktop Alert EDU™ is a byproduct of our customers' requests. Alert delivery is all about reliability. Personnel located in common areas need to know how to respond to an emergency. Desktop Alert has Desktop Alert EDU™ installations slated for delivery to DoD locations in both Europe and North America. Additionally, the Health Care sector has responded very favorably to the Desktop Alert EDU™. All EDU's are listed and available from the standard Active Directory and regarded as an end-user or end-point and as such, the activation is instant. Desktop Alert is now introducing the EDU to 146 U.S. National Guard locations as a common area alerting end-point." said Howard Ryan, Desktop Alert's CEO.

Desktop Alert is a major provider of net-centric mass notifications systems to DoD. Desktop Alert solutions are being used to support DoD installations in all 54 states, territories, and locations as well as many other locations worldwide. Installations and commands throughout the DoD benefit from Desktop Alert's alert delivery window (how fast the alert is actually received and acknowledged by personnel) enterprise-wide.

Worldwide U.S. Military organizations such as The United States National Guard, The United States Air Force Academy, The United States Military Academy at West Point, Multi-National Forces in IRAQ, The U.S. Air Force, and The U.S. Army now utilize the DTA mass notification platform daily for their organizations emergency communication requirements. Desktop Alert can contact thousands of computer users at their desktop and require them to click to confirm receipt of the message flashed on their screen. Those not verified can then be listed on a report and/or sent as a "Target Package" to be automatically contacted by other means such as email, SMS, phone calls and other devices.