Online Short Film Award Contest to Discover the “Next Ang Lee” Coincides with July AAIFF’10; Winner To Be Announced September 15 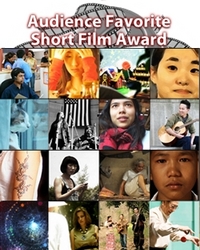 The winning film will appear on the front page of DramaFever.com

"With this brand new online contest to find the ‘next Ang Lee’, DramaFever has the rare opportunity to help emerging filmmakers share their work with hundreds of thousands film fans instantly,” -- David Hou, Vice President, DramaFever.

DramaFever.com will host the contest and festival on a dedicated DramaFever-ACV Festival page at http://www.DramaFever.com/ACV.

DramaFever, the leading video website for mainstream English-speaking U.S. online audiences interested in the best of entertainment from Asia and Asian-Americans and ACV, presenters of the Asian American International Film Festival (AAIIFF formed a partnership, which effectively extends the reach of the AAIIFF. The AAIIFF is the first and longest-running Asian film festival in America and takes place in New York theaters every summer.

"With this brand new online contest to find the ‘next Ang Lee’, DramaFever has the rare opportunity to help emerging filmmakers share their work with hundreds of thousands film fans instantly,” says David Hou, vice president of DramaFever. “Typically, directors spend years to have their film screen in dozens of theaters on the festival circuit for one or two days, and this partnership with ACV frees film makers from traditional limitations.”

The corresponding online film festival to the contest marks DramaFever’s move toward becoming a major U.S. distribution platform for film festivals introducing productions from Asia and Asian Americans to English-speaking audiences. Drawing over 70% of its audience from non-Asian audiences, the online website signed Toyota as its first major American sponsor/advertiser, which found the contest particularly attractive. DramaFever’s online audience got a 20% bump of over 50,000 more viewers in July alone. DramaFever recently launched a show page on Hulu.com.

“Working with DramaFever at a time of its growth and in time for our 33rd year of the Asian American International Film Festival (AAIIFF’10), we extend the exposure window beyond the annual festival and the subsequent National Festival Tour to a larger audience share,” says ACV’s Acting Director John Woo.

ACV sees the content deal and contest with DramaFever true to its mission “to exhibit, promote and preserve the media work by artists of Asian descent or about the Asian experience.” Filmmakers and productions screened at the AAIIFF, which takes place in New York each year, then gain greater in-theater exposure across America through the ACV National Festival Tour.

People across the United States can visit the dedicated festival show page (http://www.DramaFever.com/ACV) to view a selection of short films screened from AAIFF’09, including 11 narratives and eight documentaries. Anytime between now and 12 noon ET Wednesday September 6, visitors can view the shorts, ranging from three to 33 minutes in length, and vote one time only per film by clicking on either the “thumbs up” or “thumbs down” icon next to the film name. Convenient pause-and-resume features and quick registration make viewing and voting easy. The film with the most “thumbs up” on September 6 will be featured for one week on DramaFever.com’s homepage and will receive publicity support from DramaFever and ACV, which will announce the winner on September 15, 2010.

Documentaries (in alphabetical order by title)

ABOUT DRAMAFEVER.COM
Privately-held online video content distribution company, DramaFever.com was launched in New York in August 2009 by co-founders Suk Park and Seung Bak with the mission of making the best of Asian programming available to English-speaking American and Canadian audiences. Drawing on their experience in media, publishing and finance, DramaFever establishes licensing deals with the leading Asian networks to stream select titles in high quality with English subtitles or dubbing. DramaFever.com users can watch videos for free or pay just $4.99 per month for premium membership, which includes uninterrupted advertising-free programming, access to exclusive content and other advanced features. All subscribers can also participate in discussions, rate shows, request programs, sign up for show alerts and get the latest news on trends and developments in Asian drama, celebrities, and entertainment. As of April 2010, the company has deals to stream over 100 titles representing 5,000 hours of content, spanning all genres of media and storytelling beginning with television hit series from Korea, including suspense thrillers, historical dramas, romantic comedies and documentaries. Film, music video, reality television and other programming will be added each month, along with content from other countries. By the end of 2010, subscribers will be able to watch videos on DramaFever.com across multiple platforms. To learn more, visit http://www.DramaFever.com.

ABOUT ASIAN CINEVISION
Asian CineVision, Inc. (ACV) is a not-for-profit national media arts organization dedicated to the exhibition, promotion and preservation of Asian and Asian American media expressions. Founded in 1976 ACV presents films and video programs about the experience and culture of Asian and Asian American communities and provides consultation and technical assistance for artists, cultural and media organizations, publishes works, organizes seminars, conferences and workshops. For nearly 34 years, ACV has provided program services to filmmakers including the annual Asian American International Film Festival (AAIFF), the oldest and longest-running film festival in the U.S. bringing Asian and Asian American media to wider audiences. ACV also presents the National Festival Tour traveling the best of the recent AAIFF to underserved communities around the U.S., media-production services for independent artists and producers, a print and media archive, and a variety of training workshops.