Each year dozens of people die or are sickened by weeds they didn't know would cause them harm. The Weed Science Society of America has assembled a "rogue's gallery" of 10 that are especially dangerous. Many of them are cousins of edible foods and share similar flowers, leaves, fruit and seeds. Learning the difference is critical. Your life may depend on it! 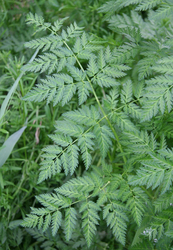 “Hemlock and other poisonous weeds are often cousins of edible foods and share similar flowers, leaves, fruit and seeds. Backyard gardeners and wild food enthusiasts need to be well-informed in order to stay safe.”

Earlier this year a woman in Washington State died from suspected hemlock poisoning after gathering the leafy green weed and using it on a salad.

Unfortunately her death wasn’t an isolated occurrence. Each year dozens of people die or are sickened by weeds they didn’t know would cause them harm.

“It’s an easy mistake to make,” says Joseph DiTomaso, cooperative extension specialist in the Department of Plant Sciences at the University of California at Davis, a member of the Weed Science Society of America (WSSA) and author of Weeds of California and Other Western States. “Hemlock and other poisonous weeds are often cousins of edible foods and share similar flowers, leaves, fruit and seeds. Backyard gardeners and wild food enthusiasts need to be well-informed in order to stay safe.”

Why are some weeds poisonous?

“While there can be a number of mechanisms at work, most plants produce their own naturally occurring pesticide to deter predators so they won’t be eaten,” DiTomaso says. “It’s a very competitive world, and no plant could survive without producing some defense mechanism.”

Though there are many toxic weed species, WSSA has assembled a “rogue’s gallery” of 10 that are especially problematic. The list is topped by two very dangerous genera of hemlock:

1. Poison hemlock (Conium maculatum) is a biennial weed with fern-like leaves that can be easily mistaken for parsley. Like parsley, it is in the carrot family. The plant produces a number of toxic substances, but the most deadly is the alkaloid coniine – a neurotoxin that disrupts the central nervous system. Ingesting even the smallest amount can result in rapid respiratory collapse and death. One way to identify poison hemlock is by the purple-red blotches on its stems. This is the species responsible for the death of the Greek philosopher Socrates.

2. Waterhemlocks (Cicuta douglasii and Cicuta maculata) are also native perennials in the carrot family. They grow in wetlands and marshes and are easily mistaken for a variety of edible plants, including young carrots, wild celery, watercress, wild ginseng and particularly parsnips. Like poison hemlock, water hemlock is highly toxic. It produces a substance called cicutoxin that stimulates the central nervous system and can trigger violent seizures.

3. Oleander (Nerium oleander) is a woody shrub often planted in suburban landscapes and along roadsides. It is extremely toxic and produces a poisonous substance that can cause heart arrhythmia and cardiac arrest. DiTomaso cautions that you should never burn oleander branches – the fumes can be hazardous. He has even heard reports of severe illness when an oleander stick was used to roast a hotdog over an open fire.

4. Bittersweet nightshade (Solanum dulcamara) is an invasive weed related to both tomato and potato plants. It can be extremely toxic, and in fact, the juice from wilted leaves is deadly. The most common type of nightshade poisoning comes from eating its green berries, which turn red to purple in color as they mature.

5. Common pokeweed or pokeberry (Phytolacca americana). All parts of this weed are poisonous – especially the roots. “Pokeweed greens are sometimes gathered and eaten, but they need to be thoroughly cooked first to break down the toxins,” DiTomaso says. “If they are prepared improperly, they can be really harmful.”

6. Pennyroyal (Mentha pulegium) is an invasive species in meadows or wet areas. It is known as an insect-repelling herb and is sometimes used as a tea. It is even found in some health food stores as an herbal medicine. But DiTomaso cautions that the weedy version of this plant is trouble if too strong a tea is made from the leaves. It can cause liver damage, lung damage and death. Both weed scientists and physicians say pennyroyal should be avoided. It’s not worth the risk.

7. Meadow deathcamas (Zygadenus venenosus) and other deathcamas species are native perennials in the lily family. They tend to grow in forested or meadowy regions. All parts of the plant are toxic. That includes its bulb, which is easily confused with edible wild onions. One differentiator between the two is that deathcamas lacks the distinctive odor typical of an onion.

8. Foxglove (Digitalis purpurea) is an escaped ornamental plant that produces tall stems ringed with colorful bell-shaped flowers. The soft leaves at its base are easily mistaken for comfrey or sage, but lack the distinctive smell of the safer species. But looks can be deceiving. This invasive weed is very poisonous. DiTomaso says it produces a chemical that can speed up and strengthen heart contractions. The leaves on the upper stem are particularly potent; just a nibble is enough to be deadly.

9. Groundcherry (Physalis spp.) is in the tomato and potato family. Its leaves and unripe fruit are poisonous if ingested and can even be fatal. But the ripened fruit loses its toxicity and is sometimes made into jellies, jams and sauces. The ripened fruit of one species, tomatillo, is a very common ingredient of Mexican salsas. DiTomaso says it is not unusual for the toxins in a weed’s fruit to break down with ripening. In fact, it’s another survival mechanism. If a bird, deer or other predator eats the fleshy fruit, the seeds inside are spread and the plants multiply.

10. Jimsonweed (Datura stramonium) is also in the tomato and potato family. It produces a dangerous poison that can be fatal to humans and animals, including livestock and pets. Jimsonweed produces seeds that are highly hallucinogenic and can trigger bizarre and violent behavior.

“Lots of weeds are edible, but there are many dangerous exceptions,” DiTomaso said. “If you have any doubt, avoid any contact with the plant until you can consult an extension agent or a trusted resource so you don’t make a dangerous or even deadly mistake.”

About the Weed Science Society of America

The Weed Science Society of America, a nonprofit scientific society, was founded in 1956 to encourage and promote the development of knowledge concerning weeds and their impact on the environment. The Weed Science Society of America promotes research, education and extension outreach activities related to weeds, provides science-based information to the public and policy makers, fosters awareness of weeds and their impact on managed and natural ecosystems, and promotes cooperation among weed science organizations across the nation and around the world. For more information, visit http://www.wssa.net.

NOTE TO EDITORS: Both high-resolution and low-resolution photos of the 10 weeds mentioned in this release are available online in the WSSA Press Room: http://www.wssa.net/WSSA/PressRoom/WSSA_PoisonousWeeds.htm.