What Would You Do if You Held in Your Hands a Secret That Could Either Destroy the World or Cure It? Anna’s Secret Legacy A new novel by S.A. Williams A Love Affai 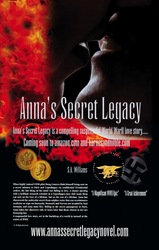 An intriguing work has entered the pantheon of contemporary historical fiction this summer with the release of Anna’s Secret Legacy—an engaging, suspenseful and provocative novel by first-time author, S.A. Williams. Anna's Secret Legacy is a no-holds-barred, exciting and believable historical novel about love, international espionage and life and death drama set in Copenhagen and Paris in April 1940, against the backdrop of a world at war. (Soft Cover, ISBN 978-0-7414-5828-5).

Laced with twists and suspense, Anna’s Secret Legacy is a fascinating love story that grabs the reader and doesn't let go. This book is available through Amazon.com, Borders.com and BarnesandNoble.com. Reporters and readers whowish to inquire more can visit http://www.annassecretlegacynovel.com today.

With the current focus on the potential for good through stem-cell research and the very real opposing threat of biological warfare that continues to increase across the globe, this story about what was going on behind laboratory doors is something that is both fascinating and relevant to today’s readers. A classic WWII epic, the story, both historically accurate and scientifically credible, is told from a unique perspective, centered in Scandinavia and its significance in a world on the brink of war. Anna’s Secret Legacy is a fascinating love story that grabs the reader and doesn't let go.

To date, Anna’s Secret Legacy has been described as “a magnificent WWII epic” and “a great achievement”, strongly reflecting the author’s engaging storytelling and incredible research. Adding depth to its compelling narrative is its great cast of characters.

The story begins when highly trained USNR pilot Doug Conyers is sent on a mission to Paris and Copenhagen via confidential Presidential orders, and the last thing on his mind was falling in love. A chance meeting with a brilliant research scientist at a Copenhagen Jazz club leads them not only to the love of a lifetime, but on the run of a lifetime. As a scientist at a prestigious Copenhagen research institute, Anna has just unraveled the molecular formula from sulphur water that can revolutionize medicine or wipe out humanity in the wrong hands – a discovery that must be kept secret at all costs. As Nazi Germany invades Denmark and Norway, her sister’s life is compromised and Anna must flee with her secret immediately.

From an action-packed escape on a Swedish freighter carrying atom bomb ‘heavy water’, to hiding in a train filled with the German Army heading towards the lowlands, Doug and Anna finally make it over the Dutch border. However, she is not yet safe. Hidden by the cloister nuns at the chateau, in the outskirts of Paris, in the secret passageway, she hides her discovery only to learn later that those closest to her are betraying her. Fate hangs in the balance, as the Gestapo requisition the chateau. Running out of provisions and becoming increasingly sick, she waits for word from Doug from the United States. Anna wonders if she will make it out alive.

About the Author
S.A Williams's international background uniquely positions her as a citizen of the world, who knows of what she speaks. A rare mix of artist and businesswoman, actress and science buff, writer and producer, Williams is both articulate and media-savvy. Educated in major cities across Europe, a graduate of Syracuse University, credentialed in Global Marketing and Management, Entrepreneurship and The CEO Leadership Program from the renowned University of Pennsylvania’s Wharton School as well as Global Marketing and Strategic Management credentials from Harvard Business School, Williams is also a veteran member of the Screen Actors Guild who earned The Bronze, Silver and Gold Medals from The London Academy of Dramatic Arts and has worked on the sets of such notable films as The Age of Innocence, The Sixth Sense, Fallen, Philadelphia, Unbreakable, Rocky Balboa and others.

For additional information, contact SAW Broadcasting at 1-800-SAW-0660 or visit the web at http://www.annassecretlegacynovel.com