Nordic walking is one of the world's fastest growing fitness trends. U.S. Nordic walking pioneer Tom Rutlin has been a leading force in the movement for more than two decades, and the International Nordic Walking Federation has invited him to deliver a keynote address before their 10th Anniversary Celebration Convention in Riga, Latvia on September 26th, 2010. 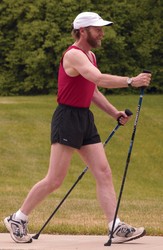 U.S. pole walking pioneer and CEO/Founder of Exerstrider Products inc. Tom Rutlin has accepted an invitation from the board of the International Nordic Walking Federation (INWA) to deliver a keynote address at the organization’s 10th Anniversary Celebration and Conference in Riga, Latvia on September 26th, 2010. INWA has member organizations in more than 20 countries around the globe.

Despite having gone somehow little noticed in his own back yard, Rutlin is widely considered to be the “father” of the rapidly growing Nordic walking movement. He has tirelessly promoted the health and fitness benefits of fitness walking with poles throughout the U.S. since introducing the first line of poles specially designed fitness walking poles, and easy-to-learn techniques which turn walking into a whole body exercise similar in benefits to Nordic (cross-country) skiing in 1988.

Called “Nordic walking” because the activity combines the simplicity and accessibility of fitness walking with specially designed poles, used much as they would be in Nordic skiing, to involve the muscles of the core and upper body, the activity first exploded in popularity across Scandinavia and Northern Europe in the decade following its introduction in Nordic skiing loving Finlanders in 1997.

There are currently an estimated 10 million plus Nordic walkers involved in the movement which is now growing in popularity throughout all of Europe and the UK, North America, Australia and Asia. The theme of INWA’s 10th Anniversary Celebration Conference is "Celebrating Nordic Walking Past, Present and Future” and Rutlin’s invitation as one of the movement’s pioneers symbolizes the organization’s growing commitment to recognizing individuals and other organizations which have made significant contributions to the evolution and advancement of the activity.

At age 63, Rutlin who has been regularly Nordic walking for more than 25 years serves as a living example of the fitness benefits of transforming ordinary walking into a whole body "Nordic walking".