Staff and volunteers from The Marine Mammal Center in California make up the female relay team which hopes to raise $11K in support of Hawaiian monk seals - the most endangered pinniped in the U.S. 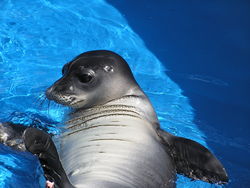 A young Hawaiian monk seal receives medical care in Hawaii before being released to the ocean. Photo courtesy NOAA.

“We need to take action for the Hawaiian monk seal because it is the right thing to do for this culturally iconic species and for the environment," explained Dr. Frances Gulland, Director of Veterinary Science at The Marine Mammal Center.

On Saturday, September 4, 2010, team "Hawaiian Monk Seal” from The Marine Mammal Center will compete in the Maui Channel Swim to support the Center’s efforts to raise funds to build an urgently needed hospital for monk seals in Kona. The female swimmers will join 52 teams and 20 solo swimmers from around the world in a daring 10 mile crossing of the Au Au Channel from the beach at Lanai to Black Rock on the shores of Kaanapali. The channel is well known for dangers to swimmers such as swift currents, tiger sharks, and the Portuguese Man O' War. The first Maui Channel Swim took place in 1972 and since then, it has grown to become the longest open water relay swim in the world. To help team "hawaiian Monk Seal" achieve their fundraising goal of $11K and save future populations of Hawaiian monk seals, go to: http://www.marinemammalcenter.org/what-you-can-do/events/team-from-the-marine-mammal.html.

“We need to take action for the Hawaiian monk seal because it is the right thing to do for this culturally iconic species, for the environment, and for future generations,” explained Dr. Frances Gulland, Director of Veterinary Science at The Marine Mammal Center, and member of swim team “Hawaiian Monk Seal.” “Young seals have a host of survival challenges to overcome including becoming entangled in ocean trash, finding food sources within the food chain that has been disrupted as a result of overfishing, and shark predation; at this stage, every seal we help counts in bringing back the population.”

The population of Hawaiian monk seals is currently 1,100 and is declining at a rate of 4% annually. This is dismal news for a species that has existed for more than 13 million years and is found only in Hawaii. For the last decade, The Marine Mammal Center in California has worked closely with government agencies and nonprofit organizations in Hawaii, including the Pacific Islands Fisheries Science Center, the Pacific Islands Regional Office of the National Marine Fisheries Service, and the Hawaii Wildlife Fund, to provide medical assistance to monk seals, often flying out veterinary teams and trained volunteers to provide hands-on-medical care in make-shift facilities.

Currently, there are no medical facilities in Hawaii for Hawaiian monk seals. This means that monk seals that are sick or injured, including pups that are prematurely weaned by their mothers or are entangled in ocean trash, are not able to be saved. Learn more about the Hawaiian monk seal program and urgent healthcare facility at: http://www.marinemammalcenter.org/about-us/organization-information/awareness-campaigns/save-the-hawaiian-monk-seal.html.

Interviews with Swimmers Available Sept. 4
On September 4, swimmers from team “Hawaiian Monk Seal” will be available for interviews to talk about the event and about the need to build the urgent care hospital for Hawaiian monk seals on Kona. Please contact Jim Oswald at 415-637-0827 if you would like to reserve time that day with swim team captain, Marjorie Boor, or team member, Dr. Frances Gulland.

About The Marine Mammal Center:
The Marine Mammal Center is the world’s largest nonprofit veterinary hospital, research and educational center dedicated to the rescue and rehabilitation of ill and injured marine mammals - primarily elephant seals, harbor seals and California sea lions - and to the study of their health. Since 1975, the Center has been headquartered in the Marin Headlands, within the Golden Gate National Parks and has rescued and treated more than 16,000 marine mammals. The Center’s newly rebuilt headquarters in Sausalito gives visitors the unique opportunity to learn about marine mammals through viewing areas and educational exhibits. For more information and to sign up for the Center’s eNewsletter, go to: http://www.marinemammalcenter.org

Hawaiian monk seals are on the endangered species list.