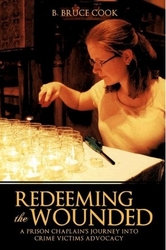 In 2008 approximately 16,262 people were murdered in the U.S., leaving family and friends to grieve the loss. (Source: NCVRW Resource Guide) Many faith-based organizations want to help but do not know how. Due to budget cuts, funding for rehabilitation and educational, faith-based counseling programs for prisoners and crime victims has suffered in almost every locality. A new way to handle these problems is discussed in Redeeming the Wounded by Rev. Dr. B. Bruce Cook (http://www.xulonpress.com and http://www.cvaconline.org under “crime victim resources”). Cook’s new vision of victim justice involves a concept of fair and equal treatment for crime victims and prisoners based on principles of restorative justice and restitution.

Cook is an ordained Methodist minister, a career correctional professional and a crime victims’ advocate, who worked “both sides of the street” in prison and in the community with crime victims. He was a county jail chaplain, federal prison chaplain and a chaplain for crime victims. He worked in four Department of Justice agencies for a total of 24 years: Law Enforcement Assistance Administration, Office of Audit and Investigation, U.S. Parole Commission and Bureau of Prisons. He directed the Georgia Department of Correction’s Impact Therapeutic Program in two halfway Houses.