The Cherokee language is now available for the first time on iPhones and iPods for more than 300 million users across the globe. 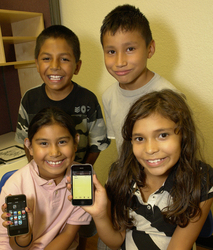 People communicate differently today...Including our language on the iPhone and iPod makes it accessible to more people, especially our youth. This is critical to the survival and growth of our language.

The leap from Native culture to pop culture has officially been made. The Cherokee language is now available for the first time on iPhones and iPods for more than 300 million users across the globe. The Cherokee Nation has been working with the software developers at Apple, Inc. for several years to incorporate the tribe’s unique written language, called the Cherokee syllabary, into new technology offered by the software giant. Cherokee is the first Native language to be featured on Apple, Inc. devices, and is one of about only 40 languages overall.

“People communicate differently today,” said Cherokee Nation Principal Chief Chad Smith. “Including our language on the iPhone and iPod makes it accessible to more people, especially our youth. This is critical to the survival and growth of our language.”

The new access to the language will allow Cherokee speakers to communicate via e-mail, text messages and across all platforms of the iPhone and iPod Touch. It allows developers to easily create new Cherokee applications as the language is now part of the operating system, opening a new market for application developers.

“Long ago, Cherokee diplomat and scholar Sequoyah worked for years to develop a written language for our people,” Smith said. “He knew that the strength of non-Indians was their ability to communicate in a written language. Of course, he was right. What he may not have been aware of was the lasting impact of our written language; that it would carry with it much of our culture, our history and our belief system. I believe that our language is the essence of our people. To that end, we started a language revitalization initiative several years ago to get our young people interested in learning the language.”

Chief Smith said the work of the Cherokee speakers and Cherokee Nation education staff has been a priceless asset to this language initiative, and extended a special thanks to Joseph Erb, Roy Boney and Jeff Edwards, who worked closely with Apple on this historic project.

In 2003, Apple added the font “Plantagenet Cherokee” to its MacOS operating system. The release of iOS 4.1 operating system brings the Cherokee language to Apple’s mobile devices. The public can access this new feature by updating to iOS 4.1, which is available as a free download via iTunes. Go to Cherokee.org for instructions on how to set up and use the Cherokee syllabary keyboard.

About Cherokee Nation
The Cherokee Nation is the sovereign operating government of the Cherokee people. It is a federally recognized tribe of more than 290,000 Cherokee citizens, with its capital located in Tahlequah, Okla. Employing more than 8,200 people, Cherokee Nation’s annual economic impact in Oklahoma and surrounding areas is more than $1 billion. To learn more, please visit http://www.cherokee.org.