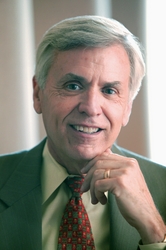 American Public Media Group, parent company of Minnesota Public Radio and American Public Media, announced today that Bill Kling, the company’s founder and its only CEO since 1966, will leave his position with the company in June, 2011. Today’s announcement is an important milestone in a succession planning process that has been underway for more than a year and that positions the company for a smooth leadership transition.

Kling, who intends to develop fundraising initiatives outside of APMG to strengthen public media and demonstrate its ability to gather and distribute regional news, has led MPR, APMG and its related companies for more than forty years. His work has helped build APMG into the largest network of public radio stations in the United States and one of the largest producers of public radio programming in the world including A Prairie Home Companion and Marketplace.

“Bill Kling is unique in terms of his ability to sustain an amazing level of energy, vision and creativity over a remarkable and storied career,” said Randall Hogan, Board Chair of MPR and APMG, and CEO of Minnesota-based Pentair, Inc. “Most CEOs count their years in office on the fingers of one hand; Bill has twice run out of fingers and toes to mark his years of service but is nowhere near out of ideas, commitment or passion. We’re delighted that he intends to continue to lend himself to the cause of public media after APMG. The board, the staff, our members and millions of listeners around the world are grateful for his many contributions, including preparing the organization so well for this inevitable transition.”

“This wonderful company exists and has prospered – beyond what any of us imagined back in 1966 – because of a tremendously talented and innovative leadership team, a remarkable group of employees who feel a calling and a passion for what they do and because 161,000 generous supporters value this work,” said Kling. “It is this collective belief in the importance of what we do that makes every day a pleasure, and it provides the energy that will lift the company to its next stages of growth and success. It’s a privilege to be a part of this team. I look forward to welcoming my successor and – after the transition – to watching this group’s achievements for years to come.”

Throughout his career, Kling has been a thought leader in new ways to strengthen the financial footing of public media and in ways to make public media more relevant and impactful at the individual and community levels. Kling said he is looking forward to the next phase of his work in this area:

“Journalism is at a crossroads and it’s clearer every day that public media has a bigger role to play,” Kling said. “I’m looking forward to the opportunity to collaborate with public broadcasting leaders across the country on ideas to strengthen public media’s regional newsgathering capacity. This is a great time for a new endeavor, particularly with the surety that APMG and its properties are – and will remain – well managed by a great team and well-led by an exceptional board.”

The APMG board of directors has been engaged in executive succession planning across the entire management team on an on-going basis, and has appointed a special committee to direct the CEO succession and candidate search process. As part of its efforts, the succession committee has retained an executive search firm to identify both internal and external candidates for the CEO position.

“Bill and his colleagues have done an excellent job of positioning APMG to be successful in the midst of a rapidly changing media industry,” said Ian Friendly, Chair of the APMG Board’s Succession Committee and U.S. Retail COO for General Mills, Inc. “APMG is a remarkable media property that is succeeding in a time when many media organizations are failing and other business models are under attack. We expect our search will attract a range of exceptional candidates – from within the company and elsewhere – who understand the landscape, who see the opportunities and who appreciate the special culture and team that has made 44 years of success possible and that is also the key to our future.”

Kling started Minnesota Public Radio as an idea at St. John’s University in Collegeville, MN, with University President Colman J. Barry, OSB. The first programming on January 22, 1967, was a concert by the Cleveland Orchestra. Today, APMG has grown to be the largest public radio organization in the United States with a network of 44 stations across the country including Southern California Public Radio in Los Angeles and Classical South Florida in Miami. In 1970, Kling was one of the founding trustees of National Public Radio, and he later served as the founding Chairman and CEO of Public Radio International.

American Public Media Group is the parent company of Minnesota Public Radio, a 40-station radio network serving virtually all of Minnesota and parts of surrounding states and home to the largest and most experienced radio newsroom in the Upper Midwest, and American Public Media, one of the largest producers of public radio programming in the world with a portfolio including A Prairie Home Companion®, Marketplace®, Performance Today®, The Splendid Table®, Being™, and American RadioWorks®. APMG is also the parent company of Southern California Public Radio in Los Angeles, Classical South Florida in Miami, the Fitzgerald Theater in St. Paul and the Greenspring Company in Minneapolis. APMG programming is heard by more than 16 million listeners on nearly 800 radio stations nationwide each week, and is supported financially by contributions from over 161,000 members. A complete list of stations, programs and additional services can be found at http://www.minnesotapublicradio.org and http://www.americanpublicmedia.org.