Music, film, radio and TV help immigrants and language students learn a new tongue and improve their accents while having fun 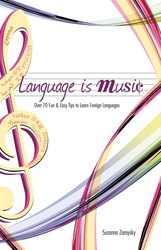 "... as a high school ESL teacher, I learned and experienced great success with an instructional approach to learning English that emphasizes music and more specifically, popular songs from American History"

Help is here for immigrants and students in need of easy, fun and affordable language learning. The new Spanish edition of the book, Language is Music (El Idioma es Música in Spanish) by Susanna Zaraysky, shares how to easily learn foreign languages with over 70 simple tips and 90 free or low-cost Internet resources to use for things you already do, such as listening to music, watching TV, and surfing the Web.

Although language learning does not appear to be a major issue, it is a major component in education and in the current immigration debate.

Currently, the Public Broadcasting Network (PBS) is showing the documentary, Speaking in Tongues, about four families trying to raise their children multilingual. The screenings are raising questions about the importance of foreign language learning and how parents can best teach languages to their children.

Not only are eager parents looking for effective language learning methods, but so are immigrants, especially those worried about immigration reform and more anti-illegal immigrant laws such as Arizona’s SB 1070 being replicated across the country.

“People are less likely to be seen as illegal if they speak English well and with a good accent. So mastering English is vital. Lawmakers, such as Senate Majority Leader Harry Reid, supporting the DREAM Act and Immigration Reform want to grant amnesty and/or citizenship to people who pass an English language test. This will create a fury of migrants scrambling to master English quickly in order to legally remain in the country. They need help and I know that absorbing a new language does not have to be a nightmare,” states Zaraysky.

Zaraysky wants to help other immigrants have an easier time learning a new language, “I saw my Dad and many other immigrants struggle with learning English.” She published the Spanish version, El Idioma es Música, because she recognized the huge need in the Latino immigrant community to find a way to learn English in a simple, cheap and fun way.

Written in easy-to-understand language, Zaraysky shares her story of learning English, Russian, French, Spanish, Italian, Portuguese, and Serbo-Croatian with perfect or almost perfect accents using music and the media so that you can experience the joy of “fluency” in any language without having to study abroad or spend money on private tutors.

Zaraysky explains the problems that exist in standard foreign language education methodology: “Traditional language lessons emphasize memorization and rules of grammar and are accessible to some students and not as much to others; as a high school ESL teacher, I learned and experienced great success with an instructional approach to learning English that emphasizes music and more specifically, popular songs from American History (e.g. West Side Story soundtrack – New York ethnic clashes and the Beatles – Anti-War Movement).

The author has what you might call “an ear” for languages. She learned to listen to language as she would music, easily internalizing melodies and structures. Complimenting her grammar lessons, she made languages come alive by listening to music, radio programs and by watching television and movies in foreign languages.

Language is Music and El Idioma es Música are available on Zaraysky's website, Amazon and via bookstore order. The ebook versions of both titles are available on various ebook sites, including Amazon Kindle and Apple.

Susanna Zaraysky grew up in California, lived in nine countries and has traveled to over 50. She has been featured on CBS, MTV, the Filipino Channel, Yahoo Finance, Fox Business News, Univison, Telefutura, and MSNBC and has given presentations about Language is Music at the US State Department, the Defense Department and to audiences in Thailand and Qatar, at Stanford University, the University of California at Berkeley, the University of San Francisco and San Jose State University.