T.R.A.-MAGE, INC., In Partnership With The Utah Solar Energy Association, Will Be Opening T.R.A.-MAGE‘s Solar Education Park For The Public Sep 23rd - 25th. 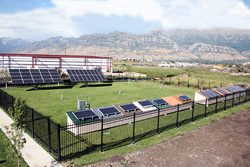 Nine different CEOs and Presidents of MAGE’s other international divisions from Germany, Austria, Switzerland, and other countries will be present as part of this event.

Utah Solar Energy Association (UtSEA) in partnership with T.R.A.-Mage, Inc. is proud to announce the Utah Solar Tour 2010. We are pleased to invite all interested in learning about solar energy to our new Solar Educational Park in American Fork, Utah. This park is designed to inform the public about the latest practical applications in solar technology, including solar tracking, solar racking and solar mounting systems. UtSEA and T.R.A.-MAGE, Inc. share a common vision of increased education and adoption in Utah and the Utah Solar Tour 2010 is a major step toward achieving that goal.

Classes will be held all three days teaching the basics about Solar Thermal, Solar Photovoltaic, and Water Management. All are invited to attend each 10 minute class and tour the Solar Education Park. Nine different CEOs and Presidents of MAGE’s other international divisions from Germany, Austria, Switzerland, and other countries will be present as part of this event.

Media day for this event is September 23rd, 2010 from 9am-2pm. Representatives of all local news outlets including radio, television and newspapers are invited to attend the unveiling of the new Solar Educational Park and its’ facilities. This event is also open to local school districts who wish to present their students with an opportunity to tour the park. Member companies of the UtSEA will be on hand to help answer any questions and provide information regarding the latest in solar energy technology.

T.R.A.-MAGE will host a Customer day on September 24th, 2010 from 11am-3:30pm. Integrators, Roofing Contractors, Distributors, Electricians, and others who are interested in purchasing and/or installing Solar Mounting Systems are invited to attend from 11am to 3:30pm.

The Utah Solar Tour 2010 will officially kick off on September 25th, 2010 at 10am (an open house will follow until 4pm). Solar energy companies from around the State of Utah will be on hand to demonstrate the newest in alternative power systems. These demonstrations include an exhibition of two different solar tracking systems as well as a series of roof displays set up with a variety of new solar racking and solar mounting systems.

Utah Solar Tour 2010 is hosted by the Utah Solar Energy Association (UtSEA) in conjunction with TRA-MAGE, Incorporated. UtSEA is an active promoter of renewable energy and its applications within the state, with primary focus on increasing the use of solar power through education, public outreach programs and active participation in developing a long-term, statewide energy policy. Since inception just three short years ago, the Utah Solar Energy Association has become a significant contributor to solar energy education.

T.R.A.-MAGE, Inc., one of the Utah Solar Energy Association’s business members, is a manufacturing firm in American Fork, Utah engaged primarily in the production of roof accessory systems. They design and produce the finest solar mounting systems in the industry for use with photovoltaic and thermal systems. Their systems are designed to allow solar panels to be easily installed on nearly any style of roof or roofing material. TRA-MAGE is a local company leading the way in roof-mounted solar energy systems.

Map to the T.R.A.-Solar Education Park