Wahoo Fitness recently began shipments of its fisica sensor key, a small accessory that inserts into the connector at the base of the iPhone, enabling communication with a variety of external health and fitness sensors. With its launch, fisica becomes the first Apple approved accessory to be broadly adopted by the iPhone App community. 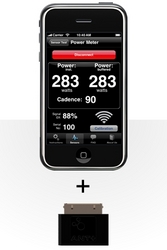 The ability to source information from external sensors was the missing piece to make the iPhone an unmatched tool for training at all levels.

Georgia tech startup Wahoo Fitness recently began shipments of its fisica sensor key, a small accessory that inserts into the 30-pin connector at the base of the iPhone, enabling communication with a variety of external health and fitness sensors. With its launch, fisica becomes the first Apple approved accessory to be broadly adopted by the iPhone App community.

The fisica accessory lets participating Apps receive previously inaccessible metrics from ANT+ compatible wireless sensors, such as bicycle speed, cadence and power meters, walk/run stride sensors and monitors for heart rate, weight and blood pressure. The result is a rapidly growing array of low-cost health and fitness Apps whose capabilities surpass those of even the most expensive proprietary fitness systems.

Recent changes to Apple's Made For iPod program have allowed Wahoo Fitness to freely distribute a Software Developer Kit to third-party App developers. Previously, Apps interfacing with hardware accessories could only be developed by the hardware manufacturers themselves. Freedom from this restriction has allowed fisica compatibility to be rapidly implemented across a wide spectrum of leading Apps - over 40 of the leading fitness Apps, ranging from rowing and skiing to running and biking, are either currently accessing sensor data through fisica or are in the process integrating the hardware (go to http://www.wahoofitness.com/Apps/Apps.asp for a list of available Apps).

fisica is a breakthrough feature for many of these Apps. Ransom Weaver, developer of the iMobileIntervals cycling and running App, says “Our goal for iMobileIntervals is to make the components of effective training -- planning, performance, analysis -- a seamless, integrated process. fisica makes this possible. The athlete can now browse their online workout plan, run the chosen workout in the iMobileIntervals app with speed, power, cadence and heart rate displayed, transmit this data live to an event website or their Facebook page, and have the finished workout automatically sent back to their training calendar for analysis. In my opinion fisica is a game-changer that leads the way to a new era of ubiquitous fitness sensors and comprehensive interoperable training systems.”

“Clearly, developing fisica with the intent of offering it to existing Apps, something that had not been done before, was a risk,” says Chip Hawkins, Wahoo Fitness CEO. “However, it just makes so much sense… the ability to source information from external sensors was the missing piece to make the iPhone an unmatched tool for training at all levels. With the uptake we’ve had from the App community and feedback we’re getting from end users, it’s comforting to see that we aren’t the only ones that see the value.”

Wahoo Fitness develops sensors and other products for use with the burgeoning market of Smartphones in the health and fitness arena. With the introduction of fisica for the iPhone, and similar functionality on the horizon for other platforms, Wahoo Fitness intends to enhance the already powerful functionality of Smartphones with new sensors and products that were previously not feasible using proprietary systems.

“fisica really creates a sea-change in fitness electronics,” says Hawkins. “Whereas athletes historically had to buy more expensive, proprietary systems to measure their workout, fisica enables the iPhone to have that functionality plus anything the legions of App developers can dream up. The feature-set of fitness Apps is already amazing, the ingenuity of the developers unbounded and together we make it possible for users to choose the experience and features that best suit their requirements. And this is just the first wave. In a few years' time this type of sensor integration with personal computing is going to be something that people just take for granted.

Located in Gainesville, Georgia, Wahoo Fitness designs and manufactures wireless fitness sensors and hardware specifically tailored to seamlessly integrate with smart phones for the display, management and transfer of fitness information. All Wahoo Fitness products communicate using the ANT+ wireless protocol and are compatible with existing devices that use the ANT+ standard. App developers interested in adding sensor information to their software using fisica can contact Wahoo Fitness for a programming package.