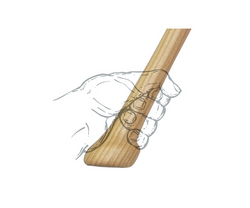 “The Pro-XR angled knob is a totally new concept in bat design, the fact that major leaguers are using it is a big deal for the technology."

One of America's most sacred pieces of sports equipment, the baseball bat, is no longer just a stick with a knob on it. It’s now a high-tech, ergonomically correct extension of the batter's hands.

On Sept. 5th, a new kind of baseball bat was used in a game between the Chicago Cubs and the New York Mets at Wrigley Field. Mets utility infielder Mike Hessman became the first player in baseball history to use a bat with an ergonomically correct, angled knob in a professional baseball game. In the eighth inning, Hessman, using a bat with the Pro-XR angled knob, lined a pitch to the left-center field wall for a stand-up double in a game that saw the Mets win 18 to 5. Five days later at Miller Park in Milwaukee, Prince Fielder of the Brewers, became the second player to hit with the Pro-XR angled knob in a game. Fielder lined a single to left center and later narrowly missed a home run with a towering shot to the right field wall. Many players have used the Pro-XR angled knob in batting practice and have placed orders for the bat. Others are expressing interest in getting their hands on the new high-performance bat.

The Pro-XR angled knob is the patented brainchild of Grady Phelan, a St. Louis-based, self-confessed serial creative and entrepreneur. Phelan developed the angled knob to improve grip and reduce hand injuries such as bruising and the common broken hamate. Phelan discovered batters get quicker hands, better plate coverage and more precise control of their swing, which translates into more power. And because the angled knob is aligned with the wood grain of the bat, players will break fewer bats simply because they know, by feel, if their hands are properly aligned with the bat. The end result is a new high performance bat, the first innovation in bats since 1972, when José Cardenal of the St. Louis Cardinals introduced the cupped end of the barrel to remove weight and improve the sweet spot of the bat.

“We’re extremely pleased with the response from major league players to the angled knob, especially since it’s so different from anything they've ever used,” said Phelan. “We thought it would take much longer for the bat to be used in games. Getting the angled knob into the batters box in such a short time is a big step forward for us.”

The rapid acceptance and use of the Pro-XR design at the major league level paves the way for amateur and recreational players to have access to the Pro-XR angled knob in the near future. Phelan is licensing the patented Pro-XR angled knob technology to bat companies interested in featuring the angled knob as an option for their bats. “We developed, patented and launched a totally new concept in bat design with better performance and improved safety – it’s a first in baseball. Now that the bat has passed the big test of being used in major league games, we're focusing on meeting future demand,” said Phelan.

For more information regarding the Pro-XR angled knob, visit http://www.proxr.com