Nearly 70% of all reported sexual assaults (including assaults on adults) occur to children ages 17 and under. An estimated 39 million survivors of childhood sexual abuse exist in America with the median age being 9 years old. 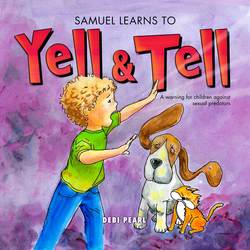 Will you know him when he comes disguised like our best friend. He swings you round. He bring you toys. He wants to play with every boy.

A shocking 50% of the predators sexually assaulting small children are close friends of the family, someone everyone trusts. Sadly, the next greatest threat comes from the child’s own family, such as an uncle, brother or grandfather. Only 10% of the abuse comes from strangers. Children are defenseless unless they are warned; especially against those who should be protecting them.

Because of this Debi Pearl, an award winning and Amazon Best Selling author has started a children’s book series called "Yell and Tell". The first book is about a lovable young boy named Samuel. Five times Samuel is discreetly challenged by his mother to consider how he should respond if he were faced with situations concerning sexual advances. The young hero thinks through each “what if” problem and comes up with a wonderfully satisfying, yet simple solution. Samuel concludes by assuring his mother he will always yell and tell. Through Samuel’s example children are taught how to respond if a predator happens to be another child, a family friend, an older mean boy, or even a nasty picture.

"Samuel Learns To Yell and Tell" is written in a musical rhyme and rhythm that children love and remember. Children from tots to pre-teens will find the story riveting.

Giving a child this simple knowledge is arming them with wisdom to always yell and always tell. This is a priceless tool for parents as they seek to protect their children from those who seek to use their innocence to satisfy their own evil lust.

Debi was prompted to write this book after receiving an alarming number of letters and emails asking for advice about children that have been molested in some manner. She wanted to write it in a way that children will enjoy reading the stories, yet clearly understand what is inappropriate. Thus they will be armed in knowing when it is important to yell and tell.

The first book entitled "Samuel Learns To Yell and Tell: A Warning for Children Against Sexual Predators" is available now through No Greater Joy Ministries.

On November 2 and 3 there will be a large Amazon promotion on the book offering purchasers discounts ranging from 25%-50% off several webstores, and bonuses worth several times the cost of the book if you purchase the book on either of these two days through Amazon. You can do this directly through the No Greater Joy website.

In 2004 Debi authored her first book, "Created To Be His Help Meet", a book on marriage. "Created" has sold over 400,000 copies through print, other languages and licensing agreements. "Listen To My Dream" written in December, 2009 is Debi’s first children’s book. Within a month of its release it reached #1 on Amazon for Children’s Educational Books twice. "The Vision", Debi’s first novel released in July, 2009 has reached the Amazon Top 100 five times and the Barnes and Noble Top 100 three times.

"Preparing To Be A Help Meet" was released on April 9, 2010 and became an Amazon Best Seller just 34 days later reaching #86. Amazon, the world’s largest on line book retailer offers over 7.8 million titles on its website. Debi combined with her husband Mike, have sold over 2 million books in over 30 languages.

For more information on "Samuel Learns To Yell and Tell" or any of their other titles contact Mel Cohen at 931 593-2484 or email Mel at mcohen(at)nogreaterjoy(dot)org.