Former NAACP chapter president and civil rights activist C. L. Bryant leads charge against “slavery of tyranny” in new flim that looks to raise awareness among black community about progressive policies and blind alligience to the Democratic Party that have failed to uphold the promise of being "free at last" 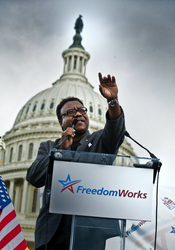 “This film was made to reveal the truth behind a 50-year-old lie that has caused an entire people to become slaves to one political idea and party.”

The rising phenomenon of Black Conservatism is the subject of a new documentary titled, “Runaway Slave.” With release set for early 2011, a trailer for the movie has already received more than 200,000 views on YouTube

“This film was made to reveal the truth behind a 50-year-old lie that has caused an entire people to become slaves to one political idea and party,” said Rev. Bryant. “It looks to dispel the notion that government knows best, and is intended to create a mindset that can free all people and instill a sense of individualism regardless of their color.”

As a first-hand witness of the civil rights movement, grandson of a former slave and member of an interracial family, Rev. Bryant offers his unique insight into an issue that is more universal than merely black or white. The film’s primary impetus is to encourage the black community to free itself and run from what Rev. Bryant labels the “slavery of tyranny.” In interviews with politicians and everyday Americans, combined with footage from national events, the film seeks to answer the question: Is the black community truly ‘free at last?’

Rev. Bryant recently introduced the movie’s trailer and addressed an audience of more than 2,500 supporters who attended the FreedomWorks “Take Back America Rally” in Washington, DC. His plea to “flee the enslavement” of post-civil rights America are illustrated throughout the trailer using U.S. Census statistics as proof that despite numerous progressive government polices, and 95 percent voter support from the black community since the civil rights movement, 34 percent of the black population is on welfare, 72 percent of all black children are born out of the wedlock, and 40 percent of all prison inmates are African American. The statistics are made even more compelling in a scene where a public school social worker confronts supporters at an Al Sharpton rally.

The film also takes viewers to the “One Nation Working Together" rally in Washington, DC. It is there that C. L. Bryant challenges a number of the rally’s keynote speakers and guest dignitaries such as Charlie Rangel, Jesse Jackson and Al Sharpton. The thought-provoking mixture of scenes is filled with labor union members and representatives riling at a White House they elected to do more for jobless Americans. Rev. Bryant engages many of the key figures in an effort to find answers to questions raised in the movie. The embattled Rangel appears amused when asked, “Are we free at last?” Jackson looks puzzled as he contemplates the question, “How do you account for the fact that 95 percent of black voters are Democrats?” NAACP president Ben Jealous can only comment, “I don’t know,” when asked what divides the parties; and Al Sharpton avoids Rev. Bryant altogether after repeated requests for “a minute of his time.”

Matt Kibbe, President and CEO of FreedomWorks, one of the film’s sponsors, commented that “Runaway Slave is a powerful explanation of how the values of individual liberty, fiscal responsibility and limited government benefit all people, not any one segment of society.

“The film is for anyone interested in learning why government is almost always the problem, not the solution," said Kibbe.

"I’m proud of the very talented team of independent, conservative filmmakers who are making this film possible,” Livingston stated. “Our goal is to help C. L. Bryant spread his message in a powerful, yet entertaining way."

One Nation Working Together Rally

Documentary LogoLogo is based on "Quilt Patterns" used to guide slaves to freedom along the underground railroad.