Benefit for Global Down Syndrome Foundation Raises More Than $1 Million 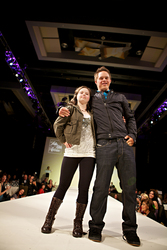 The Global Down Syndrome Foundation’s 2010 Be Beautiful, Be Yourself Jet Set Fashion Show took place Saturday, October 2, at the Hyatt Regency Denver. The 1,200 attendees raised $1.45 million dollars which will benefit the Linda Crnic Institute for Down Syndrome at the University of Colorado School of Medicine on the Anschutz Medical Campus.

The 2010 Ambassador for this year’s event was Katherine Vollbracht Winfield, a beautiful 15 month old with Down syndrome. Her grandparents, Leslie and Bill Vollbracht, and her parents, Alison and Kirby Winfield, Jr., were co-chairs of this year’s event, and major supporters of the Global Down Syndrome Foundation.

Background
One in every 733 babies are born with Down syndrome in the United States each year. There are more than 400,000 people in the US and millions worldwide with the condition. Despite the frequency, it is the least funded genetic condition by the National Institutes of Health.

The Linda Crnic Institute for Down Syndrome aims to eradicate the medical and cognitive ill effects associated with Down syndrome and to significantly improve the lives of people with Down syndrome throughout the world. The Institute is named in memory of Dr. Linda Crnic, in honor of her unwavering dedication to people with Down syndrome through translational research. Crnic, who died tragically in a bicycle accident in 2004, was a professor of pediatrics and psychiatry at the University of Colorado School of Medicine and director of the Colorado Mental Retardation and Developmental Disabilities Center. The inspiration for the establishment of the Linda Crnic Institute is Sophia Kay Whitten, the granddaughter of Anna and John J. Sie, who happens to have Down syndrome. Through the largest private contribution dedicated to people with Down syndrome in the world, the Anna and John J. Sie Foundation’s commitment of $22 million, and the Sies’ commitment to raise another $12 million ensures the Institute will be a global beacon for research and care.

The Linda Crnic Institute for Down Syndrome is the first national organization to house basic research, clinical research and clinical care for people with Down syndrome under one umbrella. The Institute is a collaboration of the University of Colorado Anschutz Medical Campus, the University of Colorado Boulder and The Children’s Hospital. It is located on the Anschutz Medical Campus in Aurora, Colo., and is the beneficiary of the proceeds from the Be Beautiful Be Yourself Jet Set Fashion Show.

In June 2010 the Institute announced its first Executive Director, world-renowned pediatrician and geneticist, Edward R.B. McCabe, MD, PhD. McCabe was most recently a professor in the Departments of Pediatrics and Human Genetics at UCLA, the Mattel Endowed Executive Chair of the Department of Pediatrics, David Geffen School of Medicine, and Physician-in-Chief of the Mattel Children’s Hospital at UCLA.