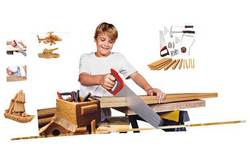 This year's list has a vocational twist. We have toys for future firemen, mechanics, designers or even filmmakers. It seems the next generation are keen to develop their skills from an early age.

In a promising sign for the future of DIY, Argos, the UK's number one toy retailer, reveals that the Real Construction Deluxe Workshop is set to top children's wish lists this Christmas. The set appears on the 2010 Top Ten Toys list released by the retailer, predicting this year's most wanted toys and games.

The Real Construction Deluxe Workshop features 'Kid Wood' which can be nailed and cut just like the real thing and transformed into various projects using the tools that come with the workshop.

Andrea Abbis, toys trading manager for Argos says, "This year's list has a vocational twist. We have toys for future firemen, mechanics, designers or even filmmakers. It seems the next generation are keen to develop their skills from an early age."

For would-be Steven Spielbergs the Vtech Kidizoom Video Camera is tipped to be a big hit. Available in pink and blue, the gadget records footage and takes digital photos, which can be downloaded, viewed and shared with friends and family.

School-starters can start to finesse their mechanical skills with the Lego Ultimate Vehicle Building Set that features a pull back motor and enough accessories and bricks to build every imaginable vehicle.

Fireman Sam remains a popular choice and his Deluxe Fire Station includes a fire extinguisher, fire pole and even includes a bell on the side for a realistic fireman ring.

Potential property developers will love Monopoly Revolution the 75th anniversary edition of the family favourite that features an electronic banking unit for a modern take on the classic.

The Top Ten toys for 2010 are all featured in the Argos Christmas Gift Guide out in October and available in store or online at http://www.argos.co.uk.

The release of the Top Ten Toys list celebrates the launch of http://www.bigplay.co.uk where toy lovers can check out the latest deals at Argos and play Top Trumps on-line with friends.

Argos is a unique retailer recognised for choice, value and convenience. It sells general merchandise and products for the home from over 700 stores throughout the UK and Republic of Ireland, online and over the telephone. In the last financial year, Argos sales were £4.3 billion.

Argos serves over 135 million customers a year through its stores. On average, 18 million UK households, or around two thirds of the population, have an Argos catalogue at home at any time.