Rutgers University adds to the growing list of prestigious US universities studying the myriad health benefits of walking with a TrekDesk Treadmill Desk. 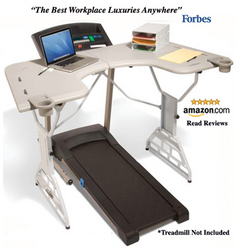 We are pleased to learn that Rutgers has joined an expanding list of prestigious universities utilizing the TrekDesk for a wide range of studies that will provide further medical evidence as to the dangers of sedentary lifestyles.

Rutgers University announced a new study this week analyzing the cognitive effects of walking while working with a TrekDesk Treadmill Desk; specifically its impact on productivity, concentration and attention span.

The study, announced in the Daily Targum, a publication serving the Rutgers community, will be conducted by the Department of Exercise Science and Sports Studies and led by Dr. Brandon Alderman.

In an interview with the Daily Targum Dr. Alderman explained the rationale for the study utilizing the TrekDesk: "Society is becoming more inactive and that includes the college population and younger people. The purpose is to get people up and not sitting because they are sitting for large parts of their day. In elementary schools, children are forced into desks because teachers don't want them moving. If we let them move around, maybe it would promote better learning. If the treadmill desk has a positive effect on cognition, people could use them to be more productive. Even if the cognition is the same for walking, then it means people can exercise without losing productivity.”

The article went on to say that this type of research could determine the positive effects the treadmill desk has on the body, as well as the mind. For a society facing an epidemic of obesity, this type of study could highlight a potential solution.

“We are pleased to learn that Rutgers has joined an expanding list of prestigious universities utilizing the TrekDesk for a wide range of studies that will provide further medical evidence as to the dangers of sedentary lifestyles as well as the health and productivity benefits of walking continually throughout the day. The study by Dr. Alderman is of great interest to us and we are confident the results will help propel our Movement Revolution initiative within the U.S. stated TrekDesk CEO Steve Bordley.”

Previous studies have shown walking just 10,000 steps a day (5 miles) provides a significant boost to the brain and overall mood. Studies out of the University of Illinois illustrated a 15% increase in memory and cognitive abilities in just six months along with a 43% increase in the production of small blood vessel production in the brains of test subjects who were previously sedentary the year prior.

Harvard University studies illustrated a 47% decrease in depression symptoms within weeks and an increase in serotonin and dopamine production responsible for feelings of happiness and well being.

“Once Americans realize what we are doing to ourselves and our children by sitting in chairs all day we believe that they will demand a re-engineering of our work places and schools to allow continual movement throughout the day,” concluded Bordley.

TrekDesk is the first affordable, full sized, height adjustable work station which when added to an existing treadmill allows individuals the opportunity to walk at slow speeds while they work/study achieving 10,000 steps in as little as 3-4 hours.

TrekDesk is currently available for sale online at TrekDesk.com for $479.00 including free shipping. Join the TrekDesk “Movement Revolution” to learn more about these studies on TrekDesk’s Facebook page at http://www.facebook.com/pages/TrekDesk-Treadmill-Desk/80743563805