“If I Was Justin Bieber”

What would you do if you were Justin Bieber? I know you would be livin large, that’s for sure. Producer, Writer, Nicholas “RAS” Furlong is getting an inside look as his viral smash, “If I Was Justin Bieber” propels him worldwide. 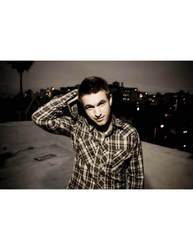 Within hours of the release of songwriter/producer Nicholas “RAS” Furlong’s video spoof “If I Was Justin Bieber,” the web exploded with thousands of YouTube views. The side brushed hair, the boyish innocence, a polished pop savvy song and signature dance moves: This sly video commentary on the unrelenting “Bieber Fever” introduces Furlong in to a global audience of appreciative viewers. In reality, Nicholas “RAS” Furlong is a songwriter more accustomed to crafting songs for others to record. Signed to hit songwriter Ryan Tedder’s Patriot Publishing (a company in alliance with Kobalt Music Publishing), Furlong writes for artists including Jordin Sparks, Big Time Rush, Josiah Bell, and Her Majesty and the Wolves.

“It’s all kind of random and strange,” says RAS of his newly minted Internet celebrity. “It’s hard not to talk about Justin Bieber because everywhere we go he’s in the news, on signs, bumperstickers, and baby t-shirts. I wasn’t poking fun or mocking him in any way – it’s celebratory of his name and what he’s doing, but at same time people who don’t like his music can relate to it because it’s funny.” In a song that name checks Rihanna, Kim Kardashian, Ludicrous, Ke$ha and Ryan Seacrest, RAS goes in and out of character, appearing both as himself and as the diminutive teenage hit maker.

Los Angeles entertainment attorney, Helen Yu, whom represents RAS’s notes “Musical parodies have a valuable role in our media culture. The South Park musical parodies are the most recent notable important cultural parodies. Pop music and pop culture shouldn’t always be so serious. RAS is certainly a dedicated artist, but in this instance, he is using creativity to make people laugh, to share joy, and to focus awareness on his ascending career as a major songwriter.”

His songwriting collaborators on “If I Was Justin Bieber,” are Lars H. Jensen and Johannes "Josh" Joergensen, and the track was recorded by the production team DEEKAY. The video was filmed and edited by Andrew Rivera and Adam Amezaga under the auspices of their company Heroes and Legends.

Nicholas “RAS” Furlong has been in Los Angeles for three short years. Originally concentrating on his career as an artist, he has since shifted his focus to songwriting. “When I walk in a room, no matter how bad of a day I’ve had, or how good of a day I’ve had, I feel like a movie director or a screenwriter when I hear something that inspires me. I work to bring it to life with a whole story line.”

“If I Was Justin Bieber” was created within a tight time frame. “I played the song for the directors. They grabbed an HD camera, shot footage, edited, and we had a video,” says Furlong. “I was surprised no one had done it before me.”

Meanwhile, reports on overwhelming viewer support are coming in from as far away as the UK, India, South Africa, Netherlands and Hong Kong. Furlong appreciates the activity, and emphasizes that although he may not be Justin Bieber, his song is shared in the spirit of a complementary creativity. “Music is at a crucial point with so much going on and so many talented people coming out and getting their chance to shine. It is so exciting to see music go back to a point of purity; when it was about the music, fun to make and listen to. It’s a fun business to be in.”