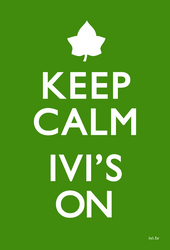 ivi TV, the online cable system, announced today that through the course of the Cablevision-Fox spectacle, its "Keep Calm, ivi's On" campaign was wildly successful resulting in a 323% increase in new subscribers from pre-blackout to post-blackout.

ivi TV kept Cablevision's 3 million customers out of the dark as it carried the affected channels live, including NFL games and the World Series, throughout the duration of the blackout.

Live broadcast television from ABC, NBC, CBS, and FOX news on ivi TV of the midterm election coverage Tuesday will only further ivi TV's acceleration, as breaking news and live sports are the primary drivers of television viewing.

"At a time when even Wall Street's top analysts signal that the entertainment industry has its future in its own hands, 'big media' backed entities arrogantly and consistently leave consumers in the crossfire while emerging companies like ivi TV drive innovation affording consumers' an attractive alternative to pricey cable TV."

During the course of the News Corp induced greed-fest, ivi TV garnered significant press coverage as a viable, legal alternative. The press campaign was complimented by grassroots based street teams handing out "Keep Calm, ivi's On" flyers across Manhattan, leading to even more word-of-mouth buzz about ivi TV's popular service.

ivi TV, like some 16,000 other companies, such as AT&T's U-Verse, pays the Copyright Office to retransmit over-the-air broadcast stations, as all other cable companies do, in strict compliance with the US Copyright Law.

"ivi TV, and America for that matter, have learned that FOX acts reflexively when confronted by the changing demands of the marketplace. Rupert Murdoch is used to throwing his weight around and getting his way, whether it involves special rule changes allowing ownership concentration of media properties or egregious charges for his FOX content over antiquated, legacy cable systems. Let FOX and Murdoch continue to rail against the inevitable. Meanwhile, significant numbers of consumers are signing up for ivi TV and watching broadcast TV live on their computers."

ivi TV offers more content than Hulu and a 30 day free trial to watch major broadcast channels including ABC, NBC, CBS, FOX, The CW, PBS, and others from a growing number of local affiliates, all available via a downloadable app at ivi.tv.

ivi TV endeavors to make the world a better place by providing a high-quality viewing experience while offering consumers what they want in the way they want it, with more choices, less hardware, and higher standards than other modes of online content delivery. At the same time, ivi TV increases viewers for channels and advertisers, continuing and adding to the live television tradition in an innovative and sustainable manner. Consumers, broadcasters and advertisers alike will agree that live television, most notably sports and news programming, is here to stay. The solution is ivi TV. And the time is now. ivi, Inc., is based in Seattle, WA. For more information, please visit http://www.ivi.tv