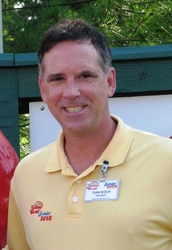 Holiday World & Splashin’ Safari will continue to be owned and operated by the Koch family “into perpetuity,” according to the park’s new president and CEO, Dan Koch.

Koch, 46, takes the helm following the sudden death of his brother Will in June.

“Will and I were business partners for decades and had spoken on the phone daily for more than 30 years,” says Koch. “I consider it an honor to step in as president and continue the expansion plans my brother and I crafted together. In the meantime, Will’s three children will have time to finish their education and learn more about the family business before they decide how they would like to be involved in the future of the park.”

Koch says his mother, Pat, will continue as the park’s Director of Values, greeting guests at the front gate and providing motivation and guidance to the management and staff.

Dan Koch is managing partner in the law firm Koch Parafinczuk & Wolf in Fort Lauderdale, Florida. He plans regular trips to the Santa Claus, Indiana, park and daily communication with management. He has two young children.

Along with his four siblings, Koch grew up in the town of Santa Claus; his first job was playing a costumed elf at Santa Claus Land, as Holiday World was called prior to 1984. His other seasonal jobs at the park included working in the rides and games departments, helping on the parking crew and hauling trash. He graduated from Heritage Hills High School in 1982 and the University of Miami in 1986 with a degree in Business Administration and Finance. Following a year working fulltime at Holiday World, Koch returned to the University of Miami, where he earned a law degree in 1990. He practiced law in Miami for 15 years before starting his own law firm in Fort Lauderdale.

Holiday World Theme Park and Splashin' Safari Water Park, in Santa Claus, Indiana, will celebrate their 65th anniversary in 2011. The park opened in 1946 as Santa Claus Land and has been owned and operated by the Koch family ever since. For more information, visit Holiday World or call 1-877-Go-Family.