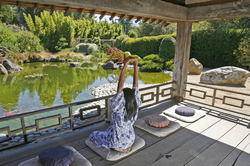 Explains Stusser, “Far from a pampering palace, we began with the idea of creating a safe, beautiful place to release stress, anxiety and pain, and we have stuck to that intention through good and bad times, never compromising it as a fundamental value."

Osmosis Day Spa Sanctuary, the only venue in the U.S. to offer Japanese-style cedar enzyme bath treatments, has been named “America’s Most Spiritual Spa” by the prestigious magazine, Spirituality & Health. http://www.spiritualityhealth.com/spirit/archives/americas-most-spiritual-spa-2010-osmosis-day-spa-sanctuary

The idea for Osmosis began when its founder, Michael Stusser, had his own life-changing healing and spiritual experience in Japan, which convinced him that it was his mission to offer the treatments in this country in a beautiful Japanese-style environment. Osmosis, which began humbly in 1985 in a small backyard facility made from a recycled chicken coop, is now a spacious structure surrounded by exquisite Japanese gardens. The full service spa also currently offers a wide range of treatments in addition to its signature cedar enzyme baths. http://www.osmosis.com

“This award is so meaningful to us since it resonates with the deeper intentions of Osmosis,” explains Stusser. “Far from a pampering palace, we began with the idea of creating a safe, beautiful place to release stress, anxiety and pain, and we have stuck to that intention thru good and bad times, never compromising it as a fundamental value. It leads directly into our long-term goals of being a vitality center, being environmentally sensitive and giving back to the community, and what could be more spiritual than that?”

In the course of its 25-year history, Osmosis has grown to become a Sonoma County landmark and an internationally known retreat for local residents and visitors from around the globe. For twelve years, it has been awarded “Best Day Spa in Sonoma County” in the North Bay Bohemian by popular vote.

In addition, daytime television's fastest-growing talk show, The Doctors, http://www.osmosis.com/video/ featured the Osmosis Enzyme Bath as one of the Top Ten Health Trends of 2010, and. The Osmosis meditation garden was recently identified by Sukiya Living, a magazine for Japanese garden aficionados, as one of the most authentic Japanese-style gardens in the US.