To perfect your skills, learn the snare drum or just for fun! 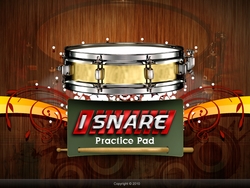 iSnare costs significantly less than a traditional practice pad and can be played virtually anywhere. Even in a place that won’t allow noise, users can just plug in headphones and jam out. The biggest difference with the iSnare is the ability to choose from several different snare tones including Rock, Jazz, Dance and Electronic (Techno), which can’t be done on a traditional drum practice pad.

Since the iPad offers a large screen to practice on, iSnare can be played with both hands and fingers simultaneously to mimic playing on an actual snare drum. Snare drums are one of the most important drums in the drum family, and with iSnare, you get the sensation of playing the snare drum, with all of the special effects and convenience of iPad’s technology.

Whether for amusement or practicing convenience, iSnare is a hands-on music app that can be played anywhere, no Internet connection or bulky equipment required. Delivering brilliant sounds and a user-friendly display, iSnare is a must have app for musically savvy iPad users or anyone who just wants to have fun and let out some steam. The iPad app is available in the iTunes store http://ax.itunes.apple.com/us/app/isnare-practice-pad/id400745818?mt=8 for only $0.99. More information can also be found on Facebook under "iSnare Practice Pad”. Put your musical talents to the test with iSnare for the iPad.